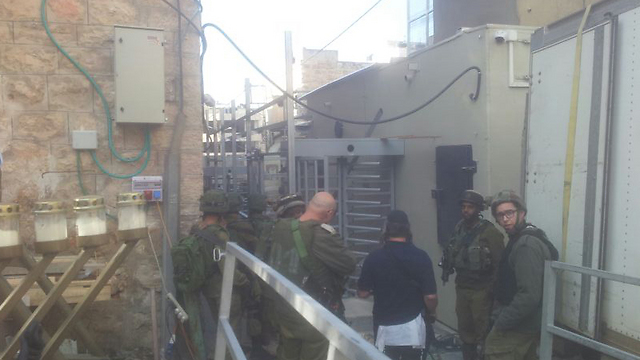 Givati soldiers shoot attacker and neutralize her; no one hurt on Israeli side; tourist reports being stabbed in village near Bethlehem, police say incident is criminal in nature.

A Palestinian woman tried to stab a soldier at a checkpoint in Hebron early Sunday afternoon, and was shot by Givati troops at the scene.

No one was hurt on the Israeli side, and the attacker received medical treatmet at the scene. The Palestinian Red Crescent said two Palestinians were wounded by rubber bullets in clashes with the IDF following the attempted stabbing.

Earlier, a tourist reported he had been stabbed inside the village of Beit Sahour east of Bethlehem. Police said the stabbing was a result of an argument over money. The tourist, who was only lightly wounded, was being treated by the Palestinians. The stabber is known to security forces.

On Saturday night, armed Palestinians opened fire at IDF troops twice at the Qalandiya refugee camp near Ramallah, but none of the troops were hurt.

In the first incident shortly before 9pm, armed terrorists opened fire at a pillbox, harming no soldiers but causing damage to the post.

IDF and Border Police forces were called to the scene to search the refugee camp for the perpetrators. There, they were met with gunfire again. None of the troops was hurt, but damage was caused to their military jeep. The Israeli troops did not return fire.

Following the two incidents, the checkpoint was temporary closed for traffic.