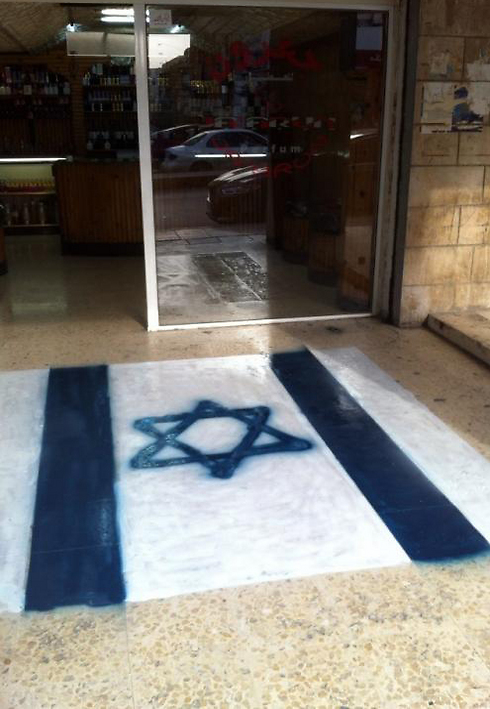 Abdel Ja'aron draws Israeli flag on floor of his shop and is arrested for insulting a country considered to be a 'friend'.

A shopkeeper in the city of Irbid in northern Jordan who painted an Israeli flag at his shop's entrance – so that clients entering would step on it – ran afoul of the Jordanian authorities, who removed the flag and arrested him for insulting a nation considered a "friend". Abdel Fattah Ja'aron, 60, a perfume shop owner, said that last Monday security officials came to his store and erased the Israeli flag he painted in front of his store. He was then taken in for questioning.

"The next morning they transfered me to the governer of Irbid district, Ja'aron told Jordanian media. "The deputy governor forced me to sign a financial commitment of 3,000 Jordanian dinars not to repeat the act". According to him, security officials and the deputy governor said that he had no right to act as he did because Jordan is a country that has a peace treaty with Israel, and that drawing and stepping on Israel's flag is considered an insult and an injury to the country that is considered a 'friend'.

Despite the authorities' demands, Ja'aron promised that he "will continue to draw the Israeli flag on the store's floor as a means of expressing my outrage at the repeated Zionist attacks against the Palestinian people. Even if this will cause me to lose all my money, I will go." He added that the store is his private property, and therefore nobody has the right to interfere with what he paints on the floor.

Al-Araby al-Jadeed, published in London, reported that other shop owners in the city expressed their solidarity with Ja'aron by painting Israeli flags at the entrance to their stores. The paper also noted that Jordanian authorities have previously removed Israeli flags used by anti-Israel protesters. Jordanian authorities recently fenced off the square near Israel's embassy in Amman that has become the focal point of anti-Israel protests.

Two months ago, the Jordanian Lawyers Association, in a show of solidarity with the Palestinians, painted Stars of David on the floor and staircases of Amman's main courthouse so that jurists and passers-by would step on the Israeli-Jewish symbol and degrade it.