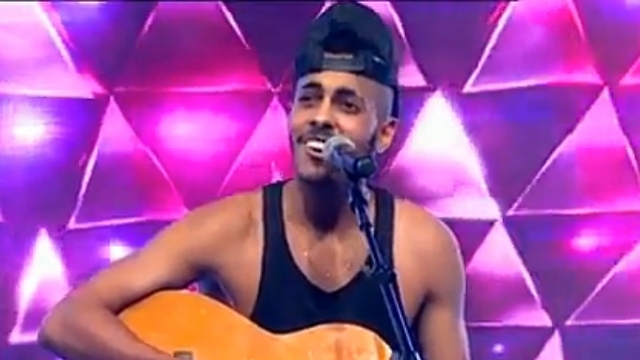 Network receives hundreds of complaints after contestant plays song with lyrics full of gay stereotypes; the writers say they tried unsuccessfully to prevent it from being aired.

A contestant on Channel 2's highly popular singing reality contest "HaKokhav HaBa" (Rising Star) recently caused a flurry of complains when he sang a song deemed homophobic by many viewers – and now the songwriters have said the wrong was written as a private joke and that they tried unsuccessfully to prevent it from being played on-air because they did not want to offend the LGBT community.

The network received hundreds of complaints, many pointing specifically to host Assi Azar and judge Harel Skaat, who are among the most high-profile gay people in the country. The song, "Come out of the Closet", was heavily praised by the judges. The lyrics urged someone named Moshiko to come out of the closet and included lyrics referring to the titular character dropping soap, refraining from participate in sports, and many more stereotypes.

"Besides reaffirming benighted stigmas and attitudes created by the 'text', Assi Azar and Harel Skaat astonished by adding sexual harassment to the situation when they 'argued' on live TV about who would get the guy who sang the song," wrote on irate viewer.

Another wrote that "the presence of openly gay hosts is most welcome, but not in the case of these two. It's not okay for such a stereotypical and homophobic song to be spotlighted during primetime on Channel 2, while hundreds of teenagers are watching and learning that they can mock someone's sexual orientation and even force him to come out of the closet because of a light and amusing song."

"The reality in Israel for LGBT teens is more difficult that what is known or shown in the media," wrote another viewer. "Teenagers experience homophobia at school and 'homo' is the most common insult in school hallways. And then the 'HaKokhav Nolad' episode comes along."

One of the two men who wrote the song, Adir Golber, said on Tuesday that he was shocked to discover it would be performed before a national audience. Golber said he had tried to prevent the show from airing the song, but was told that the performance had already been filmed and couldn't be cut from the show – but that the writers could get credit. Golber said he had given the contestant who sang the song, his friend Maor Gamliel, permission to sing the song at his audition, but never expected it to air on primetime TV.

Golber also accused the TV show of blatantly lying when it claimed that Gamliel wrote the song as a joke for a friend who came out of the closet. He said he and a friend had written the song when they were 17.

"Moshiko is a real person and a friend of ours," explained Golber. He said the song was written as a joke because friends expected Moshiko to come out of the closet, only to ultimately realize he was straight. Golber further said that Gamliel originally did not proceed to the second stage of auditions on the show, but then offered to sing the song. According to Golber, Gamliel was told that he could try to proceed to the next round of auditions only after he agreed to sing the song.

Golber emphasized that the songwriters had no intention of offending the LGBT community. "We completely support the community," he said. "I volunteer for three years at a place that works to advance tolerance and acceptance of the other. We love the community and go to pride parades."

The TV show's producers denied the choice of song had anything to do with the moving forward in the competition. "Before the audition was aired, there were talks between one of the song's writers and the show's production, during which he said the humorous song was written about a friend who came out of the closet. Broadcasting the song was approved with credit for the writers, and the production was even told that the guy about whom the song was written knew it was going to be aired. It's important to repeat that we apologize to viewers who were offended."