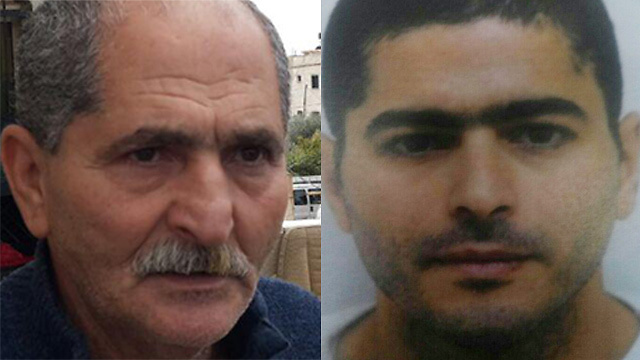 Relatives arrested on suspicion of accessory to murder as manhunt continues for Nashat Melhem, who allegedly murdered three people in shooting attacks; father tried to contact shooter after realizing his weapon was missing.

Police on Tuesday arrested the father of Nashat Melhem, the suspected terrorist behind the terror attack on a Tel Aviv pub on Friday that claimed the lives of two people and wounded several more. He is also suspected of killing a taxi driver during his escape from the scene of the shooting.

According to the Melhem family's attorney, Nechumi Feinblatt, Mohammed tried to contact his son on the day of the attack.

"They spoke that day, it's not clear if it was before or after the attack," Feinblatt told Ynet.

Five others were arrested along with Mohammed Melhem, including two cousins and a friend, on suspicion of acting as an accessory to murder, while his mother was detained for questioning.

A relative of Melhem said following the father's arrest that "the arrest will not do anything. Nashat will not care about seeing any of his relatives under arrest... He is an insane person. I ask the Shin Bet and police to leave the family alone and search for Nashat. We are also urging him to turn himself in."

It was Melhem's father who first contacted police after seeing his son's photo on television. "It's important to me now that they reach my son and arrest him, because he's still armed, and just like he murdered two people he could murder more," he said on Saturday.

A friend of the father, G., identified the weapon Nashat used in the attack when he saw it in the news. "I saw the magazine and remembered that there was one person I know that has a weapon like this to this very day, and that's Mohammed Melhem," G. said of the rare weapon.

"I called him, asked him where was his weapon. He told me 'at home in the safe.' I told him to see if it's still there. He was not at home at that point so he told me he was going there to check. After half an hour he called me back and said, 'the weapon is not here.' I told him 'go to the police right away, report to them about the weapon.'"

The magazine of the weapon used by Nashat Melhem in the attack (Photo: Motti Kimchi)

"Mohammed called his son after he learned his weapon was taken from him, and he tried to find out if there really was suspicion that one of the family members took the weapon," the lawyer, Feinblatt, said.

Despite that, Feinblatt insists Mohammed was not involved in the attack itself. "The Shin Bet knows about (the call). I can say for sure that the father did not help his son escape. He's very much worried about his standing. He was a police volunteer, and has been working in security for 30 years," Feinblatt told Channel 10.

As part of the investigation, two youths from East Jerusalem have also been arrested - one a resident of Shuafat and the other living in the Old City. Police is investigating whether the two had been in contact with Melhem prior to the attack.

The Haifa Magistrate's Court extended Mohammed Melhem's remand by only two days, after police asked to extend the remand by 12 days. The remand of Nashat's uncle and two other relatives has also been extended.

Earlier, a judge ordered the release of Nashat's brother Jodat, who was arrested on Saturday on suspicion of being an accessory to murder. Police, which asked to extend Jodat's remand by six days, is considering appealing the decision.

A family friend said that "We are certain none of the relatives who were arrested have anything to do with the murder. I hope the police find every person who was involved. Criminals like that should not stay alive, including Nashat. They are a danger to the public."

He called on Nashat Melhem to turn himself in. "You're still running crazy. Stop with these actions that have destroyed us. Shame on you. Reveal your hiding place. Eventually they will arrest you. If not today, then in the coming days."

Meanwhile, new details from the investigation emerged, with two police intelligence assessments suggesting that Melhem may have escaped to northern Israel. Another assessment raised the possibility that he managed to reach the West Bank.

As time goes by – the search for the killer is now on its fifth day – the belief is growing among police that the suspect received help after escaping his crime scenes, which is why it decided to focus its investigation on the Melhem family.

Despite these assessments, the Tel Aviv Police has continued to operate at high alert levels as the hunt goes on for the loose gunman.

Police Commissioner Roni Alsheikh visited the family of Alon Bakal, one of the two people murdered at the Tel Aviv pub, on Tuesday morning. Alsheikh addressed the search for the first time, stressing the importance of keeping investigation details confidential.

He hinted that some progress had been made, saying that residents of the Tel Aviv metro area could significantly "reduce tensions."

Some public criticism had been leveled at police and security officials, as no senior official publicly discussed the hunt for Melhem during the first few days of the search.