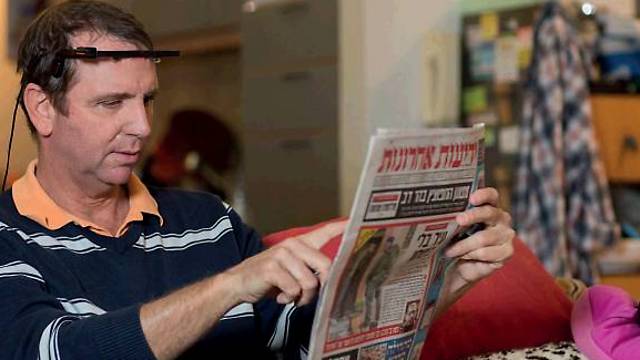 Israeli device is eyes for vision-impaired

OrCam has tiny camera that can help visually-impaired people navigate cities, identify currency and products, and read texts – and now it's available in Hebrew.

OrCam, an Israeli device that can help visually-impaired people "see," is now available in Hebrew.

The Jerusalem-based company evening unveiled on Tuesday a new version of its computerized device for the visually-impaired.

The device consists of a tiny camera mounted on eyeglasses and a wire connecting it to a computer about the size of a cigarette box, which can scan the surroundings and report what it sees – now, for the first time, also in Hebrew.

Operating the device is not complicated. With the push of a button, it photographs the object in front of the user and reads text out loud into his or her ear. It can help people read street signs and bus numbers, identify currency and products, and read menus, newspapers, and books, etc.

An additional use opens up a whole range of possibilities: the device can capture faces, allowing users to identify people he or she cannot see – or whose name he or she had simply forgot. The device does not, however, record what it photographs and can only save pictures of faces, currency or products in order to make them easier to identify.

The device first went on sale last year in a version that identified and read English text, but OrCam is now launching a Hebrew-language version.

The first models were sold for $2,500, while the Hebrew-speaking model is to be sold in Israel for about NIS 10,000. The manufacturer is in discussions with insurance companies and HMOs regarding subsidizing purchases, as with other medical aid devices.

In 1987, Lieutenant (ret.) Ziv Better was left almost entirely blind when he was wounded rescuing a fellow soldier in a minefield. He has since become a swimmer, winning five Paralympic medals.

"OrCam is not a replacement," said Better, "but I can use it to know which bus arrived at the station, and it can also read the mail, the newspaper or a book."