The body of Nashat Melhem, who was shot dead by security forces 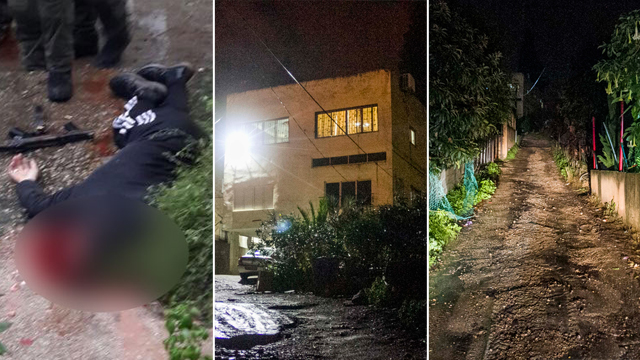 The final steps in the chase after the Tel Aviv shooter

For a week the entire country was on tenterhooks over the location of Tel Aviv shooter Nashat Melhem. On Friday afternoon, the chase ended with Melhem's death following a firefight with Israeli special forces in Arara, northern Israel.

Massive police forces spent the last week going from door to door in Ramat Aviv in search for Nashat Melhem, who was suspected of killing two in a shooting at a Tel Aviv pub and murdering a taxi driver shortly afterwards.

At the same time, some estimated that Melhem had fled to an area under Palestinian Authority control.

From left-to-right: the body of Nashat Melhem after he was shot dead by security forces; the area in which Melhem was hiding; and the trail down which he fled after apparently being tipped off that the police were on their way
But at 4.20pm on Friday, the speculation was brought to an end when Israeli special police forces (Yamam) and Shin Bet operatives found him in the al-Daharat neighborhood of Arara in the north, not far from where he grew up. Melhem was shot dead by police in between the houses of his relatives.

"We didn't sense that he was hiding in the neighborhood throughout the search," one of Melhem's relatives told Ynet. "The whole time we thought that he had gone to the Palestinian Authority.

"Before the attack in Tel Aviv Nashat visited many family members in the al-Daharat neighborhood," the relative added. "Everyone who lives there knew him. I don't get how they didn't find him in all this time, despite the fact that he was not far from where he lived."

A week-long search was conducted in the area in which Melhem was hiding. Family members were filmed, interviewed and talked about him. When security forces arrived on Friday to apprehend him he fled along a trail in the neighborhood and came out next to the house of Abdallah Younis, a resident of the town.

From there Melhem shot at the security forces using a Falcon sub-machine gun that was in his possession, which he had stolen from his father and had used to carry out the murders in Tel Aviv.

Melhem is dead, but a number of questions remain unanswered, the most central of which are whether he received assistance and whether he was acting on behalf of the Islamic State group.

Police Commissioner Roni Alsheikh, responding to Melhem's death, said: "Our task is not yet complete. The Israel Police and the Shin Bet will continue working decisively and methodically in order to reveal everyone who was involved and bring them to justice." The Shin Bet's estimate that Melhem was hiding in Arara began to firm up on Wednesday, one day after Commissioner Alsheikh announced to the Israeli public that "the level of tension in Tel Aviv can be reduced." Intelligence operatives and Shin Bet investigators signposted several buildings Arara as possible hideouts, after analyzing testimony provided by one of Melhem's acquaintances who was arrested and interrogated in the last few days on suspicion that he had aided the suspect.

On Thursday, one day prior to Melhem's death, several additional suspects were arrested in the area. Surveillance technology was also deployed to try and locate Melhem.

Signs of gunfire following a firefight between Nashat Melhem and security forces, ending with Melhem's death (Photo: Hassan Shaalan)
On Friday morning, an intelligence analysis was received that focused the search onto a specific target. Before raiding the building, which seems to have been empty before Melhem went to hide there, large numbers of IDF and police forces closed off the neighborhood. Security personnel went from house to house and marked the buildings that they had passed. Melhem was apparently tipped off that security forces were on their way and started to run while shooting, at which point he was shot and killed by the return fire from police. Commissioner Alsheikh directly supervised the operation in cooperation with Shin Bet personnel, and oversaw the activity from a nearby command post.

Melhem's relatives were not surprised by how the manhunt ended. "We called on him a thousand times to hand himself in to the police," said a family member. "It's a pity that it ended with him being shot to death. We're not surprised, we expected it the entire time."

Security forces blocking off a street in Arara while searching for Nashat Melhem (Photo: Mohammed Abu Gosh)
The families of Melhem's victims expressed their relief at his demise. "It's our only consolation," said Dudu Bakal, father of Alon, whom Melhem murdered at the Simta bar on Dizengoff Street. "I had no doubt that they would find him." Razi Shaban, brother of Amin, the taxi driver killed by Melhem shortly after the shooting, said: "It's good that the security forces got to him." "I'm happy for my sister that she doesn't have to see the face of this horrible terrorist in court and behind bars, because that would have been intolerable for us," said Mor Peretz, the aunt of Shimon Ruimi, who was also killed by Melhem at the Simta bar. "It was the one thing that was necessary for us, that they would kill him – an eye for an eye and a tooth for a tooth."