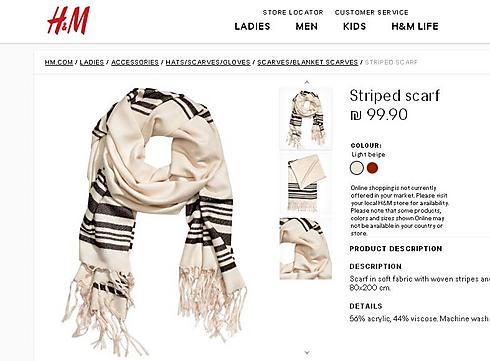 Complaints cause retail clothing giant to pull product bearing a striking resemblance to a tallit from shelves in Israel.

Retail clothing giant H&M apologized over the weekend for the sale of a scarf for women with a striking resemblance to a tallit, the fringed garment Jews have been wearing for generations during prayer. The company removed the product from shelves in Israel.

"We are truly sorry if we have offended anyone with this piece," the company said in a statement, according to Vogue UK. "Everyone is welcome at H&M and we never take a religious or political stand. Stripes are one of the trends for this season and something we were inspired by. Our intention was never to upset anyone."

But some people were upset by the product, complaining that the scarf was disrespectful and heavily criticizing the company on its Facebook page.

The scarf is still for sale on H&M's site, but the company said stock had run out in some countries because only a limited number of the garment was made. It is no longer available in Israel, where it was sold on a site for Israeli customers last week for NIS 99. It sold out quickly on the US site.

According to the Jewish Telegraphic Agency (JTA), this wasn't H&M's first foray into prayer-shawl chic: In 2011, the fashion chain issued a similarly-styled women’s poncho. Yet three years later, it was accused of anti-Semitism when it issued a tank top with a skull superimposed atop a Star of David.

Lifestyle website Racked noted that the current religious fashion trend did not begin with Jewish prayer shawls, but rather with a different religion which inspired Dolce & Gabbana's abaya collection.