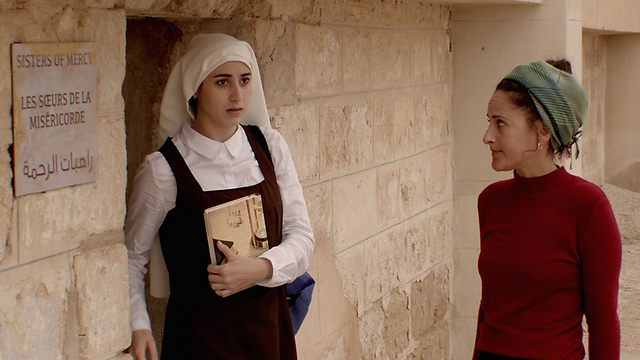 Israeli film up for Oscar – but it's Palestinian

Israeli-Arab director's comic short was shot in Israel with Israeli cast and crew, but is nominated as a Palestinian film; tells story of religious family stranded at monastery with nuns who have taken vow of silence.

The nominees for the Academy Awards were announced on Thursday, and Israel's submission in the foreign language category, "Baba Joon", did not make it to the shortlist. But there was an Israeli film, "Ave Maria", among the nominees. It will compete in the short film category – as a Palestinian film.

"Ave Maria" is a 15-minute comedy in Hebrew and Arabic directed by Basil Khalil, born in Nazareth. It was filmed in Israel and takes place in an isolated monastery in the middle of the Palestinian territories, where fate brings together five unspeaking nuns who live near a settler family, whose car breaks down nearby.

Because the Sabbath is about to begin, the family cannot use their cell phones to call for help and ask to spend the weekend at the monastery, leading to moments of oddness, amusement, and tension between the nuns and their Jewish guests.

"The nuns seen in the film live quiet lives under the Israeli military occupation in the West Bank and have a religious lifestyle of isolation and silence," Khalil said in his director's statement. "On the other hand we have Israeli settlers who represent one of the reasons for this occupation, and meanwhile are also 'under occupation' by their strong faith in their religion and its rules. I wanted to emphasize the mistrust the two groups have for each other, as well as the cooperation and learning process they ultimately have at the end of this adventure, and to show that it's possible to work towards a common goal."

Although the film had no Israeli funding, "Ave Maria" was filmed entirely in Israel and is partly spoken in Hebrew. Besides the fact that the director was born in Israel, the actors and crew are also Israeli citizens.