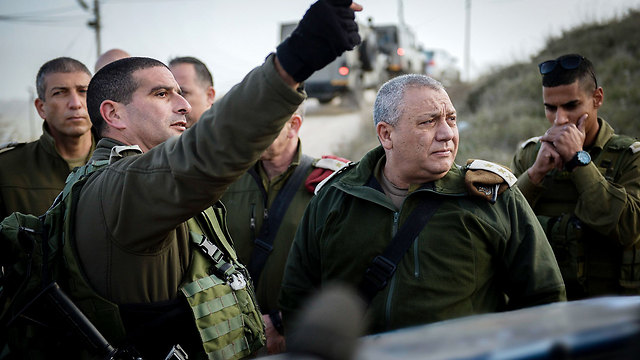 Video shows stabber who attacked Dafna Meir outside her home in the south Mount Hebron settlement.

A video released on Monday afternoon shows the escape of the terrorist who stabbed Dafna Meir to death outside her home in the settlement of Otniel the previous day.

The video shows the terrorist hiding in the bushes, and then fleeing the settlement after the attack.

On Monday, residents of Otniel were instructed to remain in their homes, lock their doors and close their shutters as security forces continued searching for the terrorist in the settlement.

IDF Chief of Staff Gadi Eisenkot visited the scene of the attack, accompanied by GOC Central Command Roni Numa, Judea and Samaria Division Commander Lior Carmeli, and the Commander of the Yehuda Regional Brigade Yariv Ben-Ezra, who briefed him on the search efforts.

The terrorist escaped the murder scene on Sunday evening, reportedly towards the Palestinian village of Khirbat al-Karmil on the outskirts of the town Yatta.

Overnight, IDF and Border Police troops arrested 27 wanted Palestinians. Twenty-four of them are suspected of involvement in terror activity and violent rioting. Several are from the southern Mount Hebron area, where the attack occurred.

Security forces still don't know how the terrorist entered Otniel. The settlement is fenced only in the forested area between one of the large yeshivot and Highway 60, from which terrorist infiltrated in the past. In other parts of the settlements there is no fence, but there are electronic measures such as motion detectors and security cameras.