Hebron resident arrested for heading a Hamas cell in Hebron 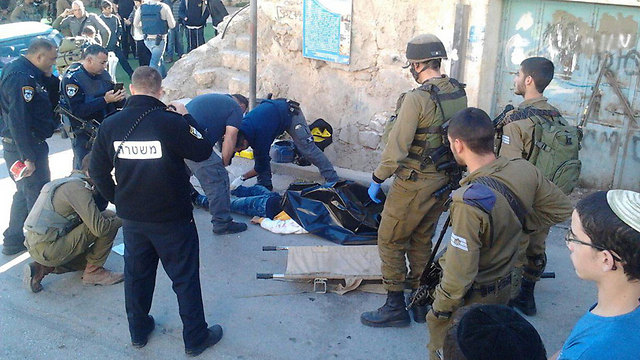 55 out of the 150 attacks carried out so far in the current terror wave orignated in Hebron; the Otniel attack marks an escalation in the severity of the attacks, as they now are at people's doorsteps.

The brutal attack Sunday in Otniel symbolizes two important points regarding the current wave of terrorism: an escalation in the severity of attacks and the fact that Hebron has become the "terror center" of this wave.

The first point is the escalation of the severity of the attacks and the transition from stabbings at intersections and on roads, which ended up with the terrorist being killed, to terror at people's doorsteps, which is more focused and much more deadly.

The second point is the official transformation of Hebron into the "terror capital" and the producer of the largest number of terrorist attacks in the current intifada. According to the Shin Bet, out of the 150 attacks carried out by terrorists so far, 55 originated in the Hebron area. The most severe attacks of the current terror wave, which has claimed the lives of 29 people came from the area.

The initial investigation of the Hebron Brigade revealed that the terrorist entered the settlement of Otniel, which is not surrounded by an electric fence, came to the family home and stabbed Dafna Meir in front of her daughter. Apparently, her screams had driven him from the settlement, but not before he was caught by the security cameras. A manhunt was carried out in the near-by villages of Yatta and Khirbet al-Karmel, where IDF soldiers and Shin Bet agents were active all night long.

During the second intifada, in December 2002, it was the severe attack at Yeshivat Otniel which marked an escalation in the type of attacks. The settlement had no fence, and two Palestinians dressed in IDF uniforms, armed with rifles and hand grenades, infiltrated the settlement, entered the yeshiva's kitchen and opened fire. Four students were killed, and some of their friends, along with soldiers called to the scene were wounded. The settlement and they yeshivah became a symbol. Community and the meeting became a symbol.

Getting back to current wave: the Hebron sector rose up later than East Jerusalem, Nablus and Ramallah. Hebron and its surrounding area quickly became the primary infrastructure from which terrorists emerged, and for now the Shin Bet and the IDF do not have a solution to restore peace.

It's possible that the Shin Bet data showing that there has been a drop in the number of attacks last month are true, but definitely not with respect to the severity of the attacks. Every day there was an incident there, the main threat being, as published in Yedioth Ahronoth, the Hebron sniper, who has acted several times and has wounded soldiers from a distance near the Cave of the Patriarchs, and until now the authorities have been unable to capture him.

The security forces' main worry is from copycats who may be emboldened by Sunday's successful attack, just as happened at the start of the current terror wave. Therefore, Central Command has instructed to stick closely to security procedures with regards to the settlements in the West Bank, where security has been beefed up lately.