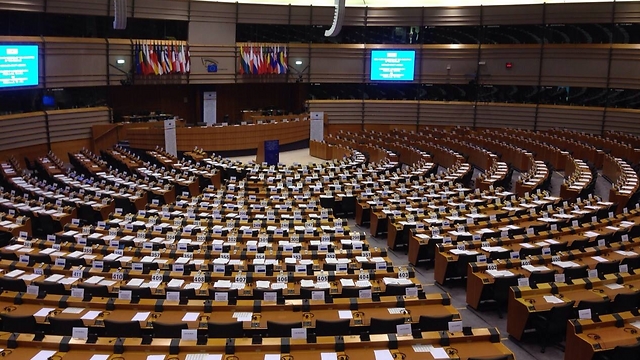 The aid package is for social infrastructure projects in Area C of the West Bank, areas under complete Israeli control; EU: 'area C remains part of occupied territory of West Bank and without it, there will be no Palestinian state'.

In an agreement reached Wednesday between the European Union (EU) and the Palestinian Ministry of Local Government, the EU agreed to provide approximately two million euros in grants towards social infrastructure projects in Area C. The region referred to as Area C is comprised of sections of the West Bank that are still under full Israeli control.

“The European Union is committed to continuing its work in Area C on two fronts—humanitarian assistance and development,” explained EU Representative Ralph Tarraf.

“The EU provides humanitarian assistance to Area C communities in need in accordance with the humanitarian imperative,” continued Tarraf. “The EU is also working with the Palestinian Authority to develop Area C and to support Palestinians living there.”

The European Union Parlaiment (Photo: Tazpit)
Although Tarraf stressed the EU’s commitment towards providing both humanitarian and developmental assistance to Palestinians, the EU assistance package totaling 9.5 million euros is primarily geared towards “master plans” of developmental assistance rather than humanitarian assistance to Palestinian communities in Area C. “The ‘master plans’ are more of a developmental approach on how to develop the communities, such as providing water networks to the people living there,” EU Palestinian Delegation’s Communication Officer, Shadi Othman told Tazpit Press Service (TPS). The “master plans” have been developed in coordination with the EU and with Palestinian localities. “They don’t have a zoning plan for the community so the EU works with the communities and with other donors and organizations to develop these ‘master plans’ in the first phase and to be sure that they are in line with all the requirements. It then submits them to the Israelis,” elaborated Othman to TPS. The first package of EU assistance will provide funding for 15 social infrastructure projects in nine Palestinian communities thus supporting approximately 3,000 Palestinians. The social infrastructure projects include financial assistance for kindergartens, water networks, roads, playgrounds, and additional classrooms. Othman told TPS that despite the absence of Israeli opposition to the development of “master plans,” Israel still requires that such plans be submitted for approval. “The Israeli government has said that it does not oppose Palestinian development in Area C in principle, but it still asked for ‘master plans’ to be submitted,” he said. Othman also explained to TPS that the the structures that have been built from such plans have not been targeted by recent demolitions of illegal Palestinian buildings in Area C. “So far, the projects that were demolished have to do with humanitarian assistance packages provided by the EU,” Othman noted to TPS. “We’re talking about ten shelters or caravans in some cases that were confiscated. We are in touch with the Israeli government about that and we have an open dialogue about these issues.” Othman said that these developmental projects in Area C fall in line with the EU’s statement of expectations for both Israel and the Palestinians that was released earlier this week. “There was a clear call by the EU Council and the 28 EU foreign ministers in their conclusions this past Monday to allow for social and economic development in Area C,” Othman explained to TPS. This was also expressed by EU Representative Tarraf earlier yesterday. “I would like to reiterate Monday’s Foreign Affairs Council conclusions. EU foreign ministers emphasized that a fundamental change of policy by Israel with regard to the occupied Palestinian territory, particularly in Area C, would significantly increase economic opportunities, empower Palestinian institutions, and enhance stability and security for both Israelis and Palestinians,” Othman said. Othman told TPS that the request for a “fundamental change of policy” calls upon Israel to allow for many more social infrastructure projects to be developed.

“The EU believes that Israel has the responsibility to facilitate, accelerate, and allow for all forms of development in Area C, whether social or economic,” Othman told TPS. “For the EU, Area C remains part of occupied territory of the West Bank and without it, there will be no Palestinian state.”