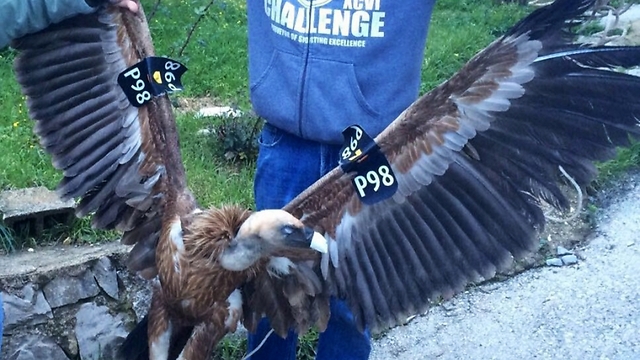 Residents in south Lebanese town of Bint Jbeil captured a griffon vulture with an Israeli ID and GPS transmitter and suspected it to be 'spying' for Israel.

The Nature and Parks Authority said Tuesday that a vulture from one of its reserves had been captured on suspicion of espionage in neighboring Lebanon after flying across the border.

Members of the Israeli public phoned the Nature and Parks Authority to alert it to Facebook reports and pictures of a vulture with an Israeli identification ring and location transmitter captured by residents of the south Lebanese town of Bint Jbeil.

"Reports passed to us show the vulture tied with a rope by local people who write that they suspect Israeli espionage apparently because of the transmitter attached to him," a statement by the authority said.

The vulture that was captured in Lebanon (Photo: bintjbeil.org)
"In the 21st century we expect people to understand that wild animals are not harmful," it added. "We hope that the Lebanese will release him."

A Lebanese security official said that civilians who found the vulture checked it for listening device, and measured its wings span - which is over two meters wide.

Nature and Parks Authority spokeswoman Tali Tenenbaum said that in their regular monitoring of the bird's movements the authority's experts had been aware for some days that it had flown about four kilometres (2.5 miles) into Lebanon.

"But we did not know he'd been captured," she said. 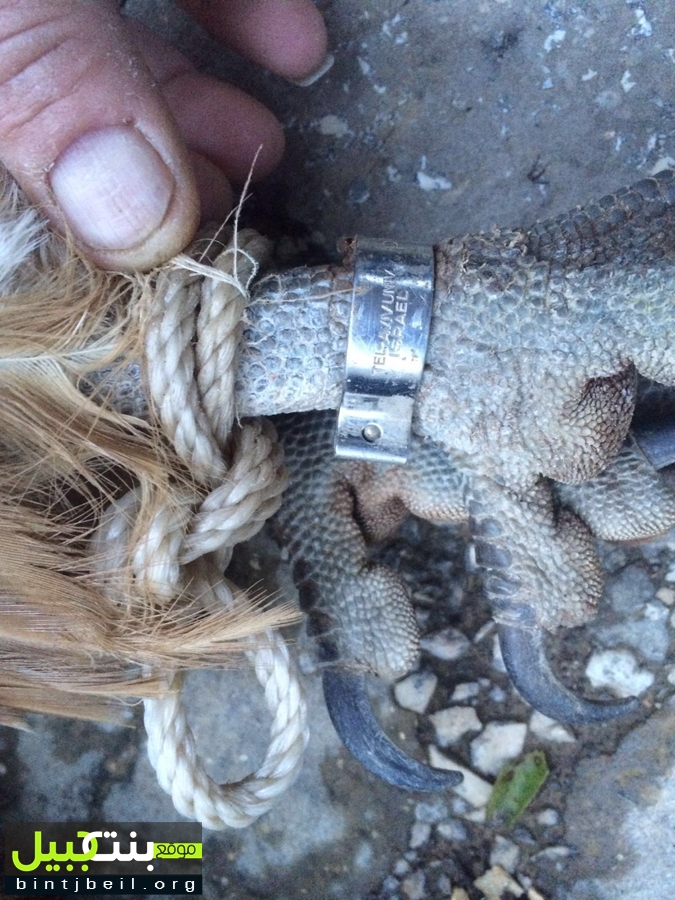 The vulture arrived in Israel in July of last year and was released at the Gamla nature reserve about a month ago.

The griffon vultures, large Old World vultures that face extinction, have decreased in numbers in Israel over the past few years due to poisoning, hunting and electrocution.

This year, the Nature and Parks Authority imported dozens of griffon vultures from Catalonia in Spain, Cyprus and Armenia in an effort to increase their numbers in Israel.

A research project began five years ago by the Ecology Lab at the Hebrew University in Jerusalem and the Nature and Parks Authority in order to learn where the vultures fly and where they find food.

As part of the project, dozens of GPS devices were attached to griffon vultures in order to track their movements and activity patterns in nature. The technological advantage of the GPS transmitters is that they can provide an accurate location for the vulture every few minutes, and are equipped with devices to measure flight speed. This allows researchers to know whether the vulture was standing still, eating, walking, flying by flapping its wings or gliding. 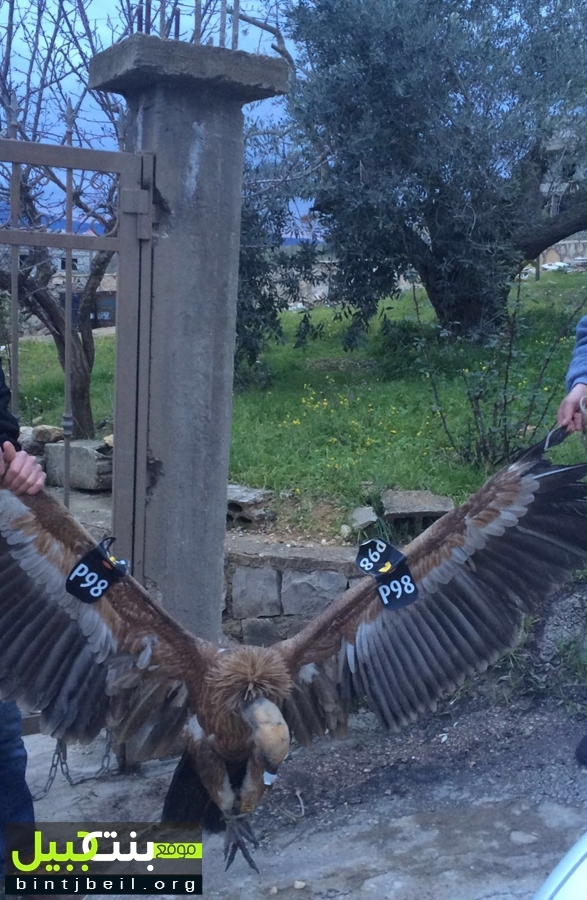 Tied with a rope (Photo: bintjbeil.org)

Conspiracy theories are endemic in the Middle East.

Last summer, Palestinian media reported claims by the Gaza Strip's Hamas rulers that they had apprehended a dolphin off their Mediterranean coastline, equipped with video cameras for an Israeli spying mission.

In 2011, Saudi media reported that a vulture carrying a GPS transmitter and an identification ring from Tel Aviv University had been detained by security forces who suspected it was being used for espionage. In 2010 Israel's Foreign Ministry dismissed Egyptian reports linking a spate of Red Sea shark attacks to Israel's Mossad intelligence agency.