Ismail Haniyeh says Hamas is preparing for the next conflict with Israel and is constantly working to build offensive underground tunnels and replenish rocket supply; Lieberman: this proves the failure of Operation Protective Edge.

Deputy Hamas leader Ismail Haniyeh said on Friday that the organization is digging new tunnels and testing rockets in order to develop and improve them. "The resistance is digging east of Gaza and conducting rocket tests west of Gaza on a daily basis," he said.

Haniyeh, who is Khaled Mashal's deputy at Hamas's political bureau, made the comments in a speech during Friday prayers ahead of the funerals of seven Hamas military operatives killed this week in a tunnel collapse in Gaza, not far from the border with Israel.

Inside a Hamas tunnel (Photo: Reuters)
Haniyeh's remarks constitute the first hint since the end of Operation Protective Edge by a senior Hamas official that Hamas is building offensive tunnels

"Tunnels underground, and rocket above the ground," said Haniyeh. "We are continuing on the path of jihad and towards the territories' liberation. The resistance is in a state of preparation, improvement and equipping of all its weapons in order to be ready for the any conflict with Israel." 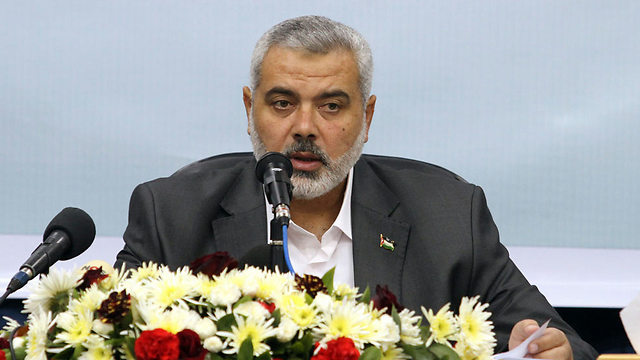 The Hamas official also said that "there are those who believe that the calm silenced the cannons, but there is a campaign silently led by the Izz ad-Din al-Qassam Brigades for the purpose of readiness and preparedness."

Meanwhile, Yisrael Beytenu Chairman Avigdor Lieberman criticized Prime Minister Benjamin Netanyahu and Defense Minister Moshe Ya'alon's handling of the terrorist group. "The sounds of digging from deep underground heard by the residents of the Gaza border area, like the wave of terror attacks, are a direct result of Operation Protective Edge's failure and the immunity Hamas got from Netanyahu and Ya'alon," Lieberman said.

Lieberman stated that Hamas is acting with impunity in the Gaza Strip – rebuilding its tunnel system, of which dozens allegedly reach Israeli territory, replenishing its rocket supplies and building more by the day, and all this without any intervention by Israel, allowing Hamas members to plan and execute terror attacks in Israel and particularly in the West Bank.

"This asymmetry made possible by the Israeli government, according to which Hamas unhesitatingly operates within Israel territory while the IDF avoids operating in the Gaza Strip, is a failure that allows Hamas to not only commit these acts of terror, but now also to choose the most convenient timing for it to renew fighting in Gaza," Lieberman said. "It's a failure for which those responsible will not be forgiven."