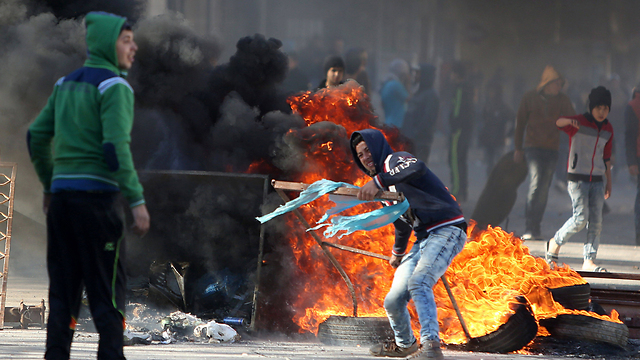 Terrorists and the power of words

Op-ed: Qabatiya, which sent out an organized terror cell for the first time in this intifada, has produced an amount of terrorists that any serious terror organization could be proud of. Perhaps in daylight this place looks normal. But in my memory, it will always be dark and dangerous.

For three months now the Israeli government has been arguing over the terminology. Standing as a fortified wall in the face of the harmful influence of words and phrases. In military speak, it's called a defensive battle, perhaps a battle of withdrawal. There are those in the government who insist on calling this a "wave of terrorism," or a "violent outburst." Others are talking about “institutional incitement” or a "round of violence." But they're all very careful not to use the term "intifada," as if the very word can change reality. When there are no clear diplomatic goals, words have the power to move battalions, as do stone-throwers and armed terrorists.

Riots in Qabatiya (Photo: AFP)
I got to know Qabatiya during the second intifada. Always at night, usually through the windows of armored vehicles. Sometimes in the fresh air, at a secure area. This town has produced an amount of terrorists that any serious terror organization can be proud of. Perhaps in the daylight this place, which is spread out over a green valley, looks normal. But in my memory, this town is always dark and dangerous. On Wednesday, when the terrorists arrived at the Damascus Gate, I was only a few kilometers away. I didn't notice the sirens of the ambulances. They've become part of the day-to-day routine. The Damascus Gate is one of these places that make you feel like you're in historic Jerusalem. Ever since the renovations in the area, it has also become a nice place to visit. On regular days, there are sellers of bagels and fruit, restaurants and a post office. You can walk to the Justice Ministry, Israel's center for law, or take a tour of the Old City. It feels like being in an old, romantic movie. And then comes the intifada, and everything becomes suspicious like in Qabatiya.

Jerusalem is helpless. No one is talking about its problems. We mustn't mention it. The politicians are afraid of talking about the wall that separated five neighborhoods from the city, except that it's those neighborhoods that most of the Jerusalemite terrorists came from. The mayor is busy registering voters to the Likud party, his next goal, so he must only say good things. The small businesses are losing customers and the Old City is emptying out.

Riots in Qabatiya (Photo: Reuters)
I attended two events this week that dealt with Jerusalem. Both took place in comfortable buildings in the western part of the city. Both had politicians in attendance. The gap between their talking and what is actually happening on the ground is headache-inducing. The Israelis feel connected to Jerusalem in theory, the politicians make vows of loyalty to it. Both are pulling away from it, full speed ahead. Leaving it with only the love of the Border Police.

Israel is in a Catch 22: Experience taught us that intifadas can only be resolved with military might. There are no peace talks that could reduce the fire, only the use of force. "Let the IDF win" - the slogan from the days of the second intifada - holds true despite the claims that you cannot defeat terrorism. Alongside that there's also a price. The two previous intifadas started regional moves: Oslo, and the Gaza disengagement. After those moves, the violence increased and the time between the intifadas grew shorter.

Back to Qabatiya: Organized terrorism is easier to resolve with military force than the terrorism of lone wolves. The problem is the tailwind. The government ministers often speak of the incitement in the Palestinian Authority, about Abbas as an enemy. But in reality, they're keeping him alive at all costs. The same Abbas who shortly after the terror attack at the Damascus Gate hosted the families of 11 terrorists in his office. Qabatiya is in Area A, under Palestinian control. There is no intention to retake it and set up a military administration there. Qabatiya will fall no more, surely not because of us. I was among those who protested against the Oslo Accords 20 years ago. It took me a while to realize it was actually the right-wing governments that were holding onto these accords with everything they've got. There's no alternative that they would dare put on the table: A diplomatic separation, not a military one, from the Palestinians. Recognizing that this is an intifada and not just crosswind would be the first step, but after that there will still be the diplomatic catch 22. The French are organizing a peace conference, while we - instead of saying there is no partner - are talking about a vague willingness to negotiate without preconditions. What exactly will these talks be about (when even in the Labor party there are those who recognize a peace agreement is unrealistic)? There's no one who can provide an answer. The main problem with the diplomatic vagueness is that it also affects the Israelis, mostly on the right. They let out their frustration in a variety of ways. One of them is by attacking the defense minister, the most serious politician in the Likud party today. Last Saturday, an anonymous ad was printed in Makor Rishon. Its headline: "Bogie, learn from Erdan how to fight terrorism." Along with that there was an insulting drawing of a teacher and a student, and below was an explanation of how Erdan succeeded in fighting against terrorism in Jerusalem by putting pressure on the population. Several days later, the defense minister announced that he would not attend the Besheva newspaper's conference. I have no idea why. The reaction was similar. The paper printed a PR story that the defense minister will miss the conference because he is scheduled to demolish houses. These responses are an embarrassment to anyone who calls himself a patriot, certainly in war time. By the way, anyone who thinks this is personal is wrong. Any defense minister would've had to deal with the same thing, regardless of who they are. We can only assume that if Bennett was offered the job today, he'd rather replace Miri Regev as the culture minister, just so he wouldn't have to deal with this frustrating situation. The IDF will win in the end, because there is no other choice. I'm worried about the day after.