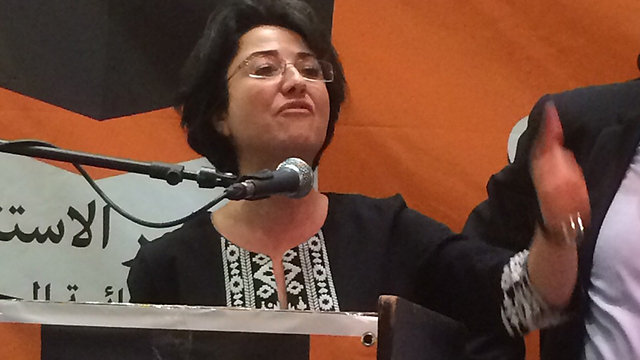 Op-ed: The Arab MKs who visited terrorists' families were voted in legally, entitling them to the protection enjoyed by all public representatives; the true test of a democracy is not protecting those who curry favor in the public eye, but rather the ability to protect those who are anathema to the state.

Israel is not a merchant of corpses. Perhaps in the past Israel has traded the bodies of terrorists (or, worse, live enemy combatants) in exchange for the bodies of Israelis, but this policy was dangerous and wrong. The point of armed conflict is to take as take those who would hurt us out of the game. The dead, ours and theirs, are out of the game. Humanity obligates giving them to their families for a proper burial. This is true of the enemy's dead and of our dead.

We demand that bodies of our soldiers be returned unconditionally, and accordingly, we will return the bodies of combatants and non-combatants being held in Israel without preconditions. However, it is tempting to set preconditions for the transfer of bodies, and to use these bodies as bargaining chips. This is especially the case when the other side is prepared to use the bodies in their possession in this manner. We must overcome this temptation. It doesn't matter what cards we hold in our hand.  The very act of exchanging bodies grants this practice a legitimacy that it shouldn't have.

Experience shows that it is typically we Israelis who blink first, for both social and cultural reasons. Even if this game were legitimate (and I believe it is not), it's a game we keep losing, it would therefore be better to not even play. The IDF, to its credit, has adopted the position that it should return the bodies without preconditions. However, the police (with the backing of Public Security Minister Gilad Erdan) have set several conditions, including only providing the bodies if the funeral is acceptable to Israel (that is, not a martyr's funeral). This is a mistake.

We must return the bodies with no preconditions. How will the funeral be handled? This is the question the security forces consider even when we don't have the bodies. I repeat: any act that creates the impression that  Israel trades bodies (and it doesn’t matter if the price is high, if it is for the exchange of the bodies of one of our soldiers, or for any other concession), is invalid.

The latest scandal involving the Knessest members from the Balad party is directly related to the issue with the bodies. The Knesset Ethics Committee called on the government not to release the bodies of the terrorists that have yet to be returned to their families. At the same time, the committee suspended the three Knesset members who visited these terrorists' families for four months. An additional argument for the suspension is that the three Knesset members stood for a moment of silence in memory of the dead terrorists.

Hanin Zoabi, one of the three Balad Ministers who was suspended for 4 months after meeting with the families of terrorists

I believe both decisions were misguided: the first for the aforementioned reasons, and the second because it is not the job of the Knesset to set ethical standards which actions that are clearly politically motivated. I'm not crazy about Balad. This is a movement that denies the legitimiacy of a Jewish state and employs provocative tactics that do not serve (in my opinion) the general public (they have never held a real discussion, they have only bickered), or their constituents (they advocate segregation as a utopian vision).

On some of these issues, it is possible to argue. But it is impossible to argue against the fact that Balad is a movement operating within the law, and has time and time again passed the standards set by the nation. The Balad Knesset members, whatever their political opinons, were legally voted into the Knesset, and represent positions which, while not necessarily carried by the mainstream, are not in fact illegal. Therefore, they are entitled to all of the protections afforded to an elected official. These protections also entitle them to speak and act in a way that may go against the wishes of the general public.

The true test of a democracy is not protecting those who curry favor in the public eye, but rather  the ability to protect those who are anathema to the state. This does not excuse the support of terrorism, as terrorism is a form of illegal activity. However, it does include the right to visit the families of terrorists. And therefore also the right to a minute of silence, certainly if one accepts the claim that the Balad Knesset members had a moment of silence not for the actions of the terrorists, but to show respect as fellow Muslims. The other members of Knesset have the right to condemn them, the right to refuse to work with them – but they do not have the right to silence and censor them. Yet that is exactly what the Knesset Ethics Committee is doing.