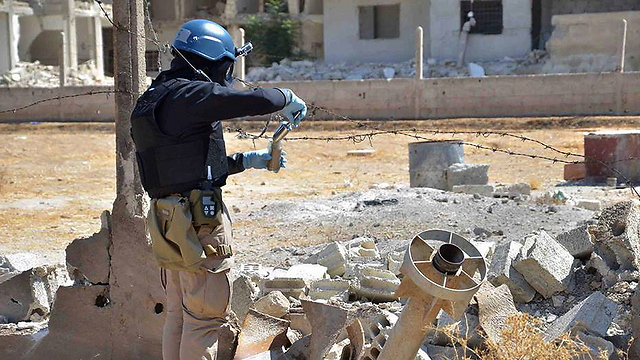 OPCW says sulfur mustard used on Kurdish troops in August southwest of Erbil; experts say ISIS either got the gas from undeclared Syrian chemical stockpile, or gained the basic know how to conduct crude chemical attack.

Islamic State militants attacked Kurdish forces in Iraq with mustard gas last year, the first known use of chemical weapons in Iraq since the fall of Saddam Hussein, a diplomat said, based on tests by the global chemical weapons watchdog.

A source at the Organization for the Prohibition of Chemical Weapons (OPCW) confirmed that laboratory tests had come back positive for the sulfur mustard, after around 35 Kurdish troops were sickened on the battlefield last August.

The OPCW will not identify who used the chemical agent. But the diplomat said the result confirmed that chemical weapons had been used by Islamic State fighters.

OPCW inspector in Syria collecting samples (Photo: AP/2013)
The samples were taken after the soldiers became ill during fighting against Islamic State militants southwest of Erbil, capital of Iraq's autonomous Kurdish region. The OPCW already concluded in October that mustard gas was used last year in neighboring Syria. Islamic State has declared a "caliphate" in territory it controls in both Iraq and Syria and does not recognize the frontier.

Experts believe that the sulfur mustard either originated from an undeclared Syrian chemical stockpile, or that militants have gained the basic know how to develop and conduct a crude chemical attack with rockets or mortars.

Evidence of ISIS chemical attack in Syria.
Iraq's chemical arsenal was mainly destroyed in the Saddam era, although US troops encountered some old Saddam-era chemical munitions during the 2003-2011 US occupation. Syria gave up its own chemical weapons, including stockpiles of sulfur mustard, under international supervision after hundreds of civilians were killed with sarin nerve gas in a Damascus suburb in 2013, an attack Western countries blame on President Bashar Assad's government, which denies it. Sulfur mustard is a Class 1 chemical agent, which means it has very few uses outside chemical warfare. Used with lethal effectiveness in World War One, it causes severe delayed burns to the eyes, skin and respiratory tract.