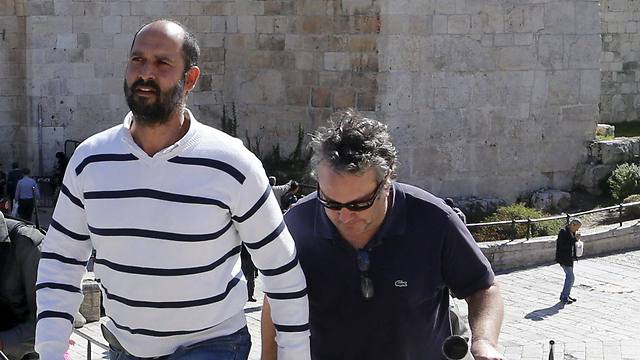 Israel's Border Police briefly detained a pair of Washington Post journalists, including the newspaper's bureau chief, as they were reporting on recent violence in East Jerusalem on Tuesday. The men were quickly released and the Israeli government issued an apology.

The incident came against the backdrop of a series of tense encounters between Israeli authorities and the international media. Officials have accused the foreign media of anti-Israel bias in coverage of the past five months of violence between Israel and the Palestinians.

The Post's Jerusalem bureau chief, William Booth, said he was interviewing Palestinian youths at Damascus Gate, an entrance to Jerusalem's Old City, when he and the paper's West Bank correspondent, Sufian Taha, were detained. The area has been the scene of violence in recent days.

Washington Post reporters William Booth and Sufian Taha being escorted to a police station near Damascus Gate (Photo:Reuters)
Booth said that after presenting their government-issued press cards to an officer, he and Taha were taken to a police station and held for roughly half an hour before they were released. He said an officer told them they had been suspected of "incitement," but said there had been a misunderstanding and freed them. He said there was no questioning or rough treatment. "I thought it was a misunderstanding that would be solved in five minutes, but it was a misunderstanding that was solved in 45 minutes," he said.

Washington Post reporters William Booth and Sufian Taha being questioned by Border Police (Photo: Reuters)
The Israel Police said a passerby had complained that people in the area were "directing Arab youths to stage provocations" in the area and that a number of suspects were detained. "Once the circumstances were clarified and there was no suspicion of criminal activity, the detained were immediately released," police said. The Israeli government moved quickly to distance itself from the officer. The Foreign Ministry called the incident "regrettable," and Nitzan Chen, director of the Government Press Office, said Booth was "unnecessarily detained ... probably the result of an unfortunate understanding." "Freedom of the press is a supreme value in the Israeli democracy," he said. "Israel is doing its utmost to enable the foreign press to work freely, without any pressure. We call upon the security forces and journalists to act with restraint and to avoid confrontations during these tense times."

Washington Post reporters William Booth and Sufian Taha being escorted to a police station near Damascus Gate (Photo:Reuters)
In Germany, Prime Minister Benjamin Netanyahu also said Israel is committed to freedom of the press. In recent months, the Israeli government has stepped up its criticism of the international media, claiming there has been anti-Israel bias as the country takes on a wave of Palestinian violence. Last week, the Knesset held a special hearing to discuss the international media's coverage of Israel. In a statement, the Foreign Press Association, which represents international media organizations operating in Israel and the Palestinian territories, protested the detentions. "We do not think it is coincidental that a baseless accusation of 'incitement' was made at a time when blanket accusations of bias are being leveled against the foreign press by Israeli officials and commentators," it said.