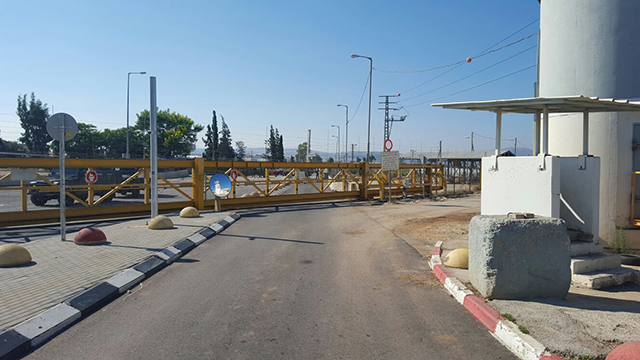 Palestinian teenagers stopped with knives and pipe bombs at Jalame checkpoint; attempted use of pipe bombs in an attack is a significant development in the strategy being used by these lone wolf attackers.

Palestinian Security Forces thwarted a bombing attempt at the Jalame checkpoint in Jenin on Tuesday morning.

Palestinian sources told Ynet that two teenagers were caught in possession of pipe bombs and knives.

The teenagers, both 15, planned to carry out a two stage attack - first detonating the pipe bombs, then knifing the survivors. The two, from the town of Yamun next to Jenin, are related, and study at the same school.

Jalame Checkpoint outside of Jenin (Photo:Ministry of Defense Crossings Authority)

Throughout the recent escalation in violence, the Palestinian Security Forces have stopped at least three attacks at the Jalame checkpoint. The Palestinian forces were deployed at the checkpoint after four attempted stabbings by teenage Palestinians from the town of Qabatiya, also next to Jenin. Israeli forces neutralized the attackers each time.

Jalame Checkpoint outside of Jenin (Photo:Ministry of Defense Crossings Authority)
This attempted pipe bomb attack is a worrying development. The fact that the Palestinian Security Forces were able to stop this attack proves that the Palestinian Authority is still continuing to stop attacks against Israeli targets, and that the security cooperation between Israel and the PA is still strong, despite the calls by many within the PA to stop all security cooperation with Israel. The attempts come at the heels of a general Palestinian teachers' strike, which left many of the schools in the West Bank closed, and left students with nothing to do. The worry is that these kids will keep themselves busy by going on social media and watching TV - of which many of the pages and stations are affiliated with Hamas and Islamic Jihad - and that the number of attacks will increase.