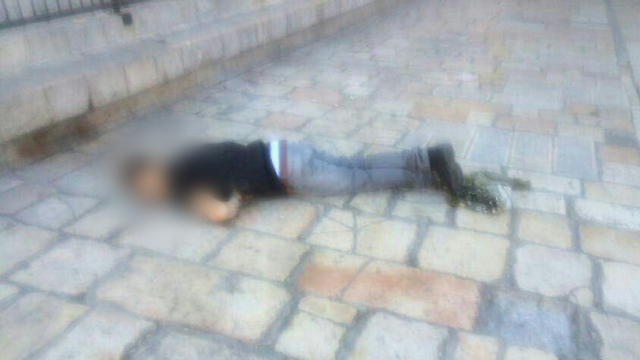 Terrorist shot and killed; officers taken to hospital in light-to-moderate condition, suffering from bruising, while passerby Palestinian woman lightly hurt in her leg from shrapnel, likely from the shooting to neutralize attacker.

Two Border Policemen and a Palestinian woman were wounded in a terror attack at the Damascus Gate in Jerusalem's Old City on Friday morning.

The attacker went through the gate, then backtracked with a knife in hand and assaulted the officers from behind. He stabbed one in the head, lightly wounding him. The other officer fought him off and was wounded in his hand.

The Border Policemen then shot and killed the stabber, who was identified as Mohammed Abu Khalaf, 20, from Kafr 'Aqab in northern Jerusalem north of the Green Line.

The attack captured by passerby
X

The attack captured by passerby

The two officers were taken to the Shaare Zedek Medical Center in Jerusalem in light-to-moderate condition.

A passerby Palestinian woman from East Jerusalem was lightly hurt in her leg from shrapnel, likely from the shooting to neutralize the attacker.

The attacker after having been neutralized

The Damascus Gate has been the site of 11 other terror attacks over the past five months, including the deadly shooting of Border Policewoman Hadar Cohen earlier this month.

On Thursday, an IDF soldier was killed and an Israeli civilian wounded in a stabbing attack at a supermarket in Sha'ar Binyamin in the West Bank, perpetrated by two 14-year-old Palestinians.