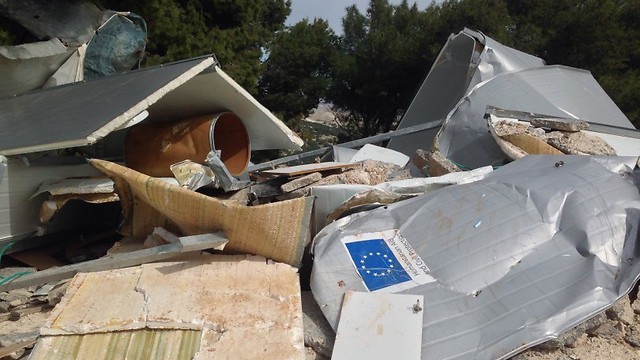 Israel sent notices to ramshackle 12 Bedouin properties; affected bedouin says 'The Israeli occupation seeks to displace us from our territory'

Israel’s Civil Administration, the military body in charge of Palestinian civilian life in the West Bank, handed out Wednesday demolition notices to ramshackle 12 Bedouin properties, including a makeshift mosque.

According to the Palestinian Authority, that quickly organized a press tour of the rocky, barren area, the structures in question are located in “East Jerusalem.” If you ask Jerusalem’s Israeli city hall, the area is “not in Jerusalem” and it knows nothing about the demolition orders.

Demolished structures in West Bank Bedouin encampment (Photo: The Media Line)
The stretch of land the Bedouin roam, about 12 acres, is in an area known as E1, arid desertic hills on the road between Jerusalem and Jericho, near Ma’ale Adumim, a West Bank settlement and city a little over 4 miles from Jerusalem that Israel estimates will inevitably remain part of it under any future peace agreement and which the Palestinians consider essential to the contiguity, and viability, of a future State of Palestine. The Bedouin residents of Jabal Al-Baba belong to a tribe that was displaced from the Tel Arad region in the Negev Desert in the early 1950s, after the establishment of the State of Israel, and relocated to the West Bank region which they still inhabit, and was then under Jordanian rule. According to the Israeli human rights organization Btselem, after Israel occupied the West Bank following the Six Day War, “the Israeli military increasingly restricted the Bedouins’ access to many of the grazing grounds. Little by little, they were forced into the vicinity of the Jerusalem‐Jericho road. There, until the 1980s, the Jahalin Bedouins established semi-permanent encampments, as well as at least two permanent structures.” Now, Israel wants to move them again, so as to link Ma’ale Adumim and Jerusalem, a plan vehemently opposed by all United States governments. Atallah Mazara’a of the Jabal Al-Baba Bedouin compound told The Media Line that “more than 20 demolitions” have taken place since 2014, in addition to “harassment and confiscation of animals.” The wrecked structures lie around like debris after a hurricane. The square blue European Union flag with its circle of stars can be seen on some of the panels of corrugated metal strewn on the gravelly grounds. These are not diplomatic buildings protected by immunity, but donated structures the Bedouin had hoped would be protected, somehow, by the foreign standard. In fact, Israel authorities appear to have a specific bone to pick with European-funded structures. According to the UN Office for the Coordination of Humanitarian Affairs (OCHA), Israel has destroyed almost as many European-funded structures in 2016 (104) as it did in all of 2015 (108). The buildings are mostly for hygiene, agriculture, solar panels and prefab living quarters. One European organization calculated that the demolition rate had increased 230 percent over last year, and 689 percent for European-funded buildings. On the single day of February 9, the Civil Administration demolished no fewer than 15 European-funded structures in Khirbet Tana, including two tents where 13 people lived, three outhouses, two water tanks and eight sheep pens. The pace of demolitions is being stepped up. The Israeli daily Haaretz reports that in the first six weeks of 2016, Israel’s Civil Administration demolished 293 homes, compared with 447 for all of 2015. The average has surged to 49 from nine per week. The demolitions have left more than 480 Palestinians, including 220 children, homeless. Addressing journalists alongside Mazara’a was Fadi Quran of the activist group Avaaz, that is organizing the community’s children to take cellphone videos of any demolitions underway and WhatsApp groups to inform journalists in real time. He congratulated Mazara’a on his tribe’s “rebuilding double the amount of structures demolished.” “The Israeli occupation seeks to displace us from our territory to replace us with the settlement of Ma’ale Adumim, as part of the E1 projectour territory,” Mazara’a said. Abu Imad Bseisat, another Bedouin spokesperson from the region , told The Media Line that “Israel has offered us blank checks , offered to double our land, but of course we’ve refused.” The Bedouin, a seminomadic people descended from Arabian desert nomads, find themselves in all senses of the term between a rock and a hard place. “They’ve been living in these areas for quite a long time and now they’re being asked to change their way of life, forced to change their way of life,” Clinton Bailey, an eminent scholar of Bedouin culture and the author of numerous books, including Bedouin Law from Sinai and the Negev: Justice Without Government, said in conversation with The Media Line. “It’s a problem for them to go against the general current of what the politicians are saying and to accept the terms, which would make it more possible for Israel to take over that area.”

Whatever they represent, the Palestinian struggle or for the intractable tragedy of the two peoples sharing a small land, who cannot find a modus vivendi, the few hundred Bedouin of Jerusalem-Jericho corridor persevere against all odds.