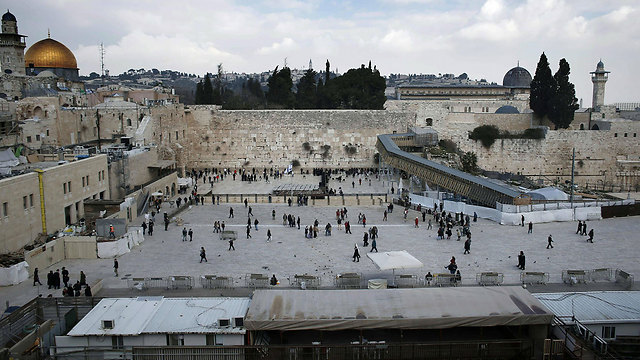 Next school year to be 'Year of Jerusalem Unity', Bennett declares

Amid a wave of terror attacks in Israel's capital, education minister announces expanded curriculum emphasizing the importance of an undivided Jerusalem and its heritage 50 years after the city's reunification.

The next school year will be “The Year of Jerusalem Unity", involving an expanded curriculum for all ages, Education Minister Naftali Bennett (Bayit Yehudi) declared on Monday.

“Everyone who tried to uproot us from the city only made us advance this program faster – and there is none more educational,” said Minister Bennett. The Education Ministry plans to launch an expanded curriculum on Jerusalem aimed at all ages. Schools are to integrate this content throughout the school year and ahead of special dates, including Jerusalem Day, which marks the reuinification of the city in 1967.

The program, which marks 50 years since east and west Jerusalem were united, is to deal with the city’s history, heritage, and sites. “Our history begins in Jerusalem,” said Bennett, “and from it we will draw our fortitude precisely in difficult times.”

The ministry’s program is to integrate topics taken from existing curricula in the subjects of history, language, geography, civics, literature, bible studies, and Israel studies. It will also suggest new lesson plans. Furthermore, the Education Ministry is to offer that schools develop a model for teaching Jerusalem that suit the school’s worldview.

The program is to launch officially on the next Jerusalem Day. The ministry noted that the program will increase the number of students visiting the different sites in Israel’s capital, including the Old City, the Knesset, the High Court of Justice, and memorial sites.

In addition, the ministry plans to nearly double the number of students participating in the Israeli Routes Odyssey project from 12,000 students to 21,000. The project is a six-day journey that begins at sunrise at Ben-Gurion’s grave in the Negev and ends with a weekend in Jerusalem. Eleventh-graders volunteer at development towns, sleep in the open, and tour sites seen as milestones in the creation of Jewish and Zionist identity.

MK Esawi Frej (Meretz) slammed Bennett’s plan, saying the minister had “gone from education to nationalism to science fiction. Fifty year s of occupation did not unite Jerusalem, but fragmented it and turned it into a powder keg that explodes anew every day.

“If Bennett wants to teach about Jerusalem,” said the MK, “he should start by teaching the institutional discrimination against 40 percent of its residents, teaching about revocations of residency, and about the lack of infrastructure in the eastern part of the city. Jerusalem is not a unified city, but rather two completely different worlds, which the government is doing all it can to separate and discriminate against.”