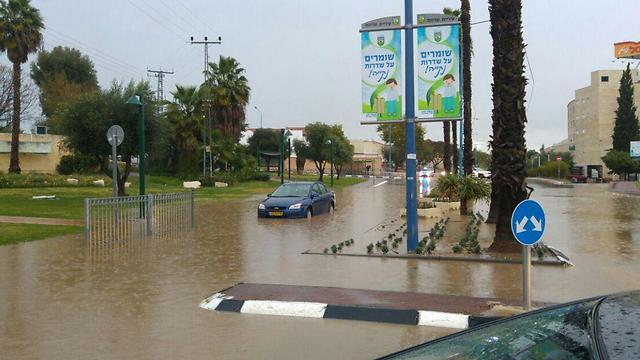 Record amounts of rain falls in Safed, heavy flooding in Dead Sea area and Sderot, and Mount Hermon closes to visitors on a stormy Monday.

Stormy weather hit the country Monday morning from north to south, with significant flooding in the Ein Gedi region as well as in Safed.

The rainfall in Safed broke all records with 18 hours of non-stop rain and no less than 70 mm of rain - about a fifth of the total amount that has fallen from the beginning of winter.

As flooding occurred in much of the country, one resident of Kmehin in the Negev was filmed being swept along a river on top of his jeep. He was rescued unharmed with a rope moments before disaster.

Driver on car swept down a river in the Negev
X

Driver on car swept down a river in the Negev

Following floods in the Dead Sea area, the entrances and exits to Kibbutz Ein Gedi were closed to traffic. Classes in the Tamar Regional Council, on the south and western edges of the Dead Sea, were canceled Monday.

In Be'er Sheva, the ceiling of a store in a shopping mall collapsed from the heavy rain.

Mall in Be'er Sheva where ceiling collapsed from rain
X

Mall in Be'er Sheva where ceiling collapsed from rain

Sderot saw major flooding due to the heavy rainfall. The city's drainage system collapsed and huge puddles were seen throughout the city. Roads and sidewalks were flooded to such an extent that residents on their way to work or to the city center found themselves barricaded.

Flooding of Nahal Lavan in the Negev (Photo: Gal Bismut)

The Sea of Galilee's water level rose by 1.5 centimeters and stabilized Monday morning at -212.65 meters. 3.85 meters are missing in order to reach the red line, meaning a full Sea of Galilee.

Mount Hermon will remain closed to visitors following a day of snow, strong winds and fog.

Negev Mountain rescue volunteers rescued four hikers stranded in Nahal Hava due to the rains. Two all-terrain vehicles of the rescue unit reached the wet hikers and spotted other travelers stranded there.