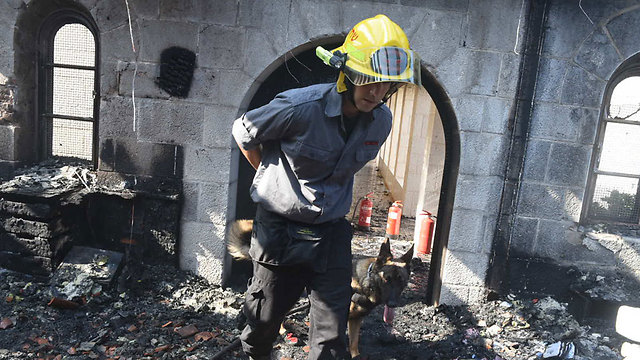 A rare Foreign Ministry opinion issued recently argues that “the ‘price tag’ phenomenon inflames and increases anti-Semitism against the Jewish people and exacerbates the delegitimization campaign against Israel.”

The statement further says that it appears to the world as though Israel has no motivation to find and prosecute those guilty of hate crimes.

Aftermath of arson fire at the Church of the Multiplication (Photo: Avihu Shapira)

Foreign Ministry Spokesman Emmanuel Nahshon said regarding the opinion  that “Israel pays the price for ‘price tag’ acts. Their actions constitute a terror attack on our collective image.”

The opinion was submitted to the Jerusalem Magistrates Court, where indictments were issued against three teenagers who allegedly sprayed hate speech against Christians on the doors of Dormition Abbey. The Jerusalem District’s Attorney Office submitted the ministry’s opinion in this context to claim that such actions cause severe damage to Israel’s global position.

The opinion, signed by Sharon Regev, director of the Department for Inter-religious Affairs at the Ministry of Foreign Affairs, stated that “the desecration at Dormoition and at the Via Dolorosa stops caused damage to Israel’s image and caused damage to its foreign relations and its recognition as a democratic state in which there is freedom of religion and freedom of worship for all communities. These acts strengthen the media narrative about violence by ‘Jewish extremists’ and religious intolerance in Israel."

Furthermore, says the ministry, the prevailing opinion among many in the world is that Israel has no motivation to deal with the phenomenon. “The accumulation of hate crimes against religious institutions in Israel, and especially the criticism aimed at Israel’s impotence in finding and prosecuting those guilty of these acts, has had a negative impact globally. The claims we have heard reflected a sense that the Israeli government allegedly does not actually want to deal with these events to the full extent of the law.”

The document invokes numerous condemnations and international media references to church vandalism. It also states that Palestinian emissaries have used the vandalism incidents to criticize Israel. "The international, Arab, and Christian presses have increasingly covered these incidents and the US State Department's 2014 'Country Report on Terrorism' referenced them,” reads the opinion.

"The accumulation of racist and destructive attacks against German religious institutions harms Israel's foreign relations and more specifically its important relations with Germany and the entire Catholic world,” it adds.

The Foreign Ministry document specifically mentions the vandalism of the Church of Multiplication in June 2015 and the arson fire at a seminar building belonging to the Greek Orthodox Patriarchate. "Following these incidents, the German government sent the Foreign Ministry an official letter through its embassy in which the embassy expressed its utmost concern for the damaging incident and attack at Dormition Abbey and the church at Tabgha and demanded an investigation in to the incident, and the capture and prosecution of the guilty,” it says.

A senior official from Chancellor Angela Merkel's office raised the malicious graffiti at Dormition Abbey and the question of security the Christian institutions with the Israeli ambassador to Germany in a recent meeting. He told the ambassador, "Top officials in the Catholic Church within and outside of Israel have strongly condemned the incidents and harshly criticized Israel.

The official added that vandalism stands as an obstacle to strengthening relations and dialogue between Judaism and the Catholic Church. Wadia Abu Nasser, an advisor to the Catholic Bishops' council, said: "This phenomenon is widespread and has not been dealt with by the authorities and police."

Attorneys for the suspected Dormition Abbey vandals argued that the incident was blown out of proportion and that it appeared to be unruly adolescent behavior.

Avichai Hajbi, representing the accused, said: "I have not found that the attorney general issued a similar opinion in cases in which synagogues were burned or had Molotov cocktails thrown at them. This development proves nothing more than panic and discriminatory administration on the part of the prosecution, when it is clear that this was an incident caused by unruly adolescent behavior – nothing more and nothing less.”