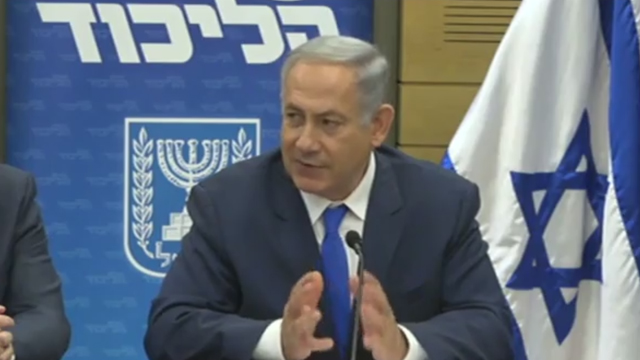 Netanyahu: Israel ranked 8th most powerful country in the world

PM rejects criticism of his foreign policy, noting he was busy 'strengthening international alliances' while the opposition is busy 'rattling on'; during emergency conference on Israel's internatioanl standing, Lieberman slams Netanyahu: 'The government has no foreign policy and this is complete anarchy.'

Prime Minister Benjamin Netanyahu (Photo: Daniel Elior)
More powerful than Israel are the United States at first place, followed by Russia, China, Germany, Britain, France and Japan. "For a long time I've been telling you that we have been seeing two trends - one of the de-legitimization of the State of Israel, and we're fighting this, and another is strengthening the alliances Israel has," the prime minister noted. In other categories, however, Israel trailed behind. In the overall list, Israel was ranked at 25, with countries like Russia (24), Portugal (23), India (22), Thailand (21), Brazil (20), South Korea (19) and Ireland (18) all ranked higher. Netanyahu, who was talking during a Likud faction meeting, told his party members that he met with Egypt's Ambassador to Israel earlier. "I continued here, in this room, with many representatives - ambassadors of African countries - to strengthen the alliances between African states and Israel." The prime minister said US Vice President Joe Biden is expected to arrive in Israel for a visit soon - an indication of Israeli ties with the most powerful country on the list, and that "we're strengthening our ties with many powers in Asia and in Latin America every day." Earlier in the day, Yisrael Beytenu leader Avigdor Lieberman and Yesh Atid leader Yair Lapid led an emergency conference at the Knesset under the banner of "Fighting for Israel's International Status." "The left wing parties held an emergency political conference today," Netanyahu said. "There are those who chose to rattle on and hold political conferences and those who work to strengthen international alliances in order to secure our future here. At the end of the day it is our power, this power, that guarantees our future and it will also lead to our enemies reconciling with us and we will continue working in that direction." Lieberman and Lapid used the conference to slam the prime minister's foreign policy, or lack thereof.

Lieberman and Lapid at the conference (Photo: Ofer Meir)

"Netanyahu is trying to take the Israeli Foreign Service and destroy it by force," Lieberman charged. "The Foreign Ministry is no one's private property, including the Netanyahu family. You can't take it and destroy it completely."

Lieberman dubbed the recent closure of several Israeli missions across the globe as "madness," adding that "the government has no foreign policy and this is complete anarchy. Netanyahu won't let ambassadors attend meetings with heads of states. How are they to feel?"

He also slammed the lack of cohesion in the government's positions on the Israeli-Palestinian conflict. "This morning, Minister Elkin came out against the Palestinian Authority, while Yoav Galant supports the PA. The government can't have three or four different positions."

"Our international standing has never - throughout the state's history from 1948 until today - been that bad. What makes the situation worse is the fact the Israeli government won't admit this," Lapid added.