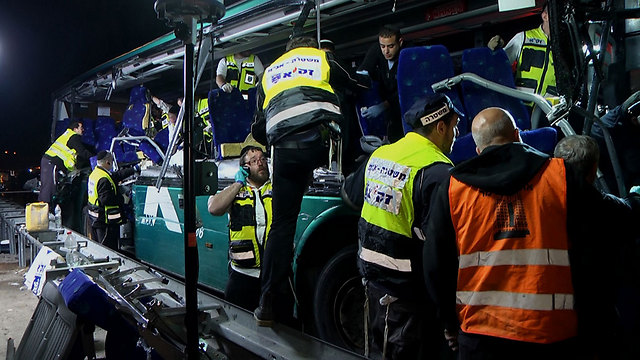 After deadly accident that claimed the life of six people, bus company heads are suspected they knew about driver's past traffic violations and still allowed him back behind the wheel.

Four senior executives from the Egged bus company have been questioned on suspicion of negligent homicide after a bus driver previously found guilty of causing an accident was allowed to return to the driver's seat, which led to the deadly collision on Highway 1 that claimed the lives of six people.

Police's Traffic Department commander, Maj.-Gen. Yaron Be'eri, said earlier this week that other executives will also be questioned on the subject.

The investigation focuses on suspicions that the executives knew about complaints made by passengers against the 402 line driver, Chaim Biton, and about his past traffic violations and the car accidents he was involved in.

The scene of the accident at Highway 1 two weeks ago (Photo: Eli Mendelbaum)

Egged spokesman Ron Ratner said in response: "We cannot comment on the matter until the investigation has been completed. Egged is cooperating with the police investigation as required. We believe the investigation will find that there was no defect in Egged’s conduct as an organization that every day provides, with the help of thousands of drivers, professional service with the utmost commitment to the safety of the passengers

Passengers were furious to learn that the driver, Chaim Biton, had been convicted of causing a similar accident two years ago, but was allowed back behind the wheel.

"Egged should not have taken this chance and allowed him to drive. I don't know how they let him go back behind the wheel. Apparently they have forgotten that they are transporting people here and not cattle," said Yinon Yazdi, who was injured in the accident.

The accident occurred between the Latrun and Anba interchanges when the bus hit a truck that was standing on the sides of the road.