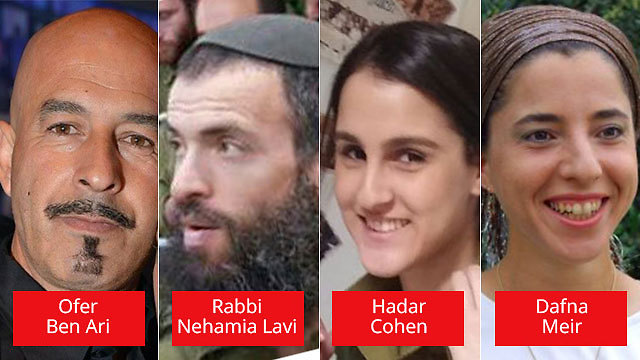 Public Security Ministry and police decide to to recognize Israelis who sacrificed their lives for others; authorized committee to discuss individual cases in March.

Israel intends to grant decorations of valor to citizens and soldiers who sacrificed their lives to save lives during the current wave of terror.

Deputy Defense Minister Eli Ben Dahan conceived of the idea many months ago and discussed the it with Internal Security Minister Gilad Erdan.

Following the murder of Rabbi Nehemia Lavi last October, Ben Dahan wrote to Erdan: "His (Lavi's) family members recently asked me to give a badge of courage to honor his noble act, in which he sacrificed his life to the nation. This act is meant to do something positive for the family of the slain and strengthen the unity and spirit of the people."

Terror victims to be granted decorations of valor

Erdan was initially uncertain if it is possible to grant decorations of valor, but it later became clear that the 1972 Decorations Law allows decorations to be granted to police officers, guards, and "citizens who acted bravely and risked their lives or who carried out an irregular courageous act." According to the 1972 law, the police commissioner and minister of internal security are authorized to grant such a decoration.

Erdan requested that the review process be expedited. Shortly thereafter, Gila Gaziel, the police's human resources chief, announced that the decorations committee will convene this month.

Minister Erdan told Yedioth Ahronoth, "Since the start of the current terror wave, many citizens and of course police, have acted with great courage and wisdom in many situations, risking and sacrificing their lives to prevent attacks and save human lives. My moral obligation is to act swiftly to grant them the appreciation and honor they deserve on behalf of Israel and its citizens. These people are examples for our youth and many citizens."

At the an event dedicated to the memory of the Sergeant Major Zidan Saif, who was killed in a terror attack in 2014, Ben Dahan mentioned a number of names the committee will review: "During the current terror wave, I have witnessed the bravery of the nation. Citizens killed terrorists with their bare hands so that other would not be wounded like Tuvia Yanai Weissman. May God avenge his blood.

"Border Police officers saved citizens and their fellow soldiers, like Hadar Cohen. Rabbi Nehemia Lavi heard an attack taking place near his home and passed away in defending his Jewish brothers. Ofer Ben Ari, a civilian, was accidentally shot by police officers when he was fighting terrorists who murdered Rabbi Reuben Birmajer near the Damascus gate. All of these people deserve a badge of courage."

The committee will also consider granting badges of courage to citizens and police officers who foiled attacks and neutralized terrorists, but did not pay with their lives. The committee can discuss recommendation of the police commissioner and the internal security minister, and it can recommend names as well. However, it is important to note that the law does not mention IDF soldiers and therefore it is not clear if Yanai Tuvia Weissman will merit a decoration because he was an off-duty soldier at the time of his death.