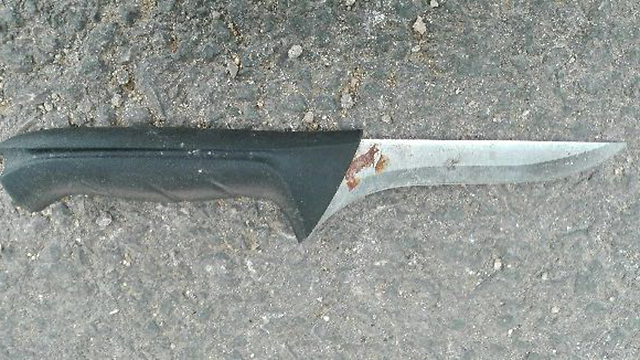 Cop directing traffic on Route 90 near Al-Auja stabbed in his shoulder by female attacker, who was arrested on the spot; police vehicle comes under fire near Rahelim Junction east of Ariel, none hurt but damage caused to car.

A police officer was lightly wounded in a stabbing attack near Al-Auja in the Jordan Valley on Thursday morning.

The officer was directing traffic because of a tree that fell down, blocking parts of Route 90 when he was stabbed in his shoulder.

The 14-year-old female attacker, a resident of Al-Auja, then fled but the wounded officer caught her after a short chase.

She was arrested on the spot and taken for questioning by the Shin Bet. She has so far refused to cooperate with security forces.

Knife used by the female attacker to stab the police officer (Photo: Police Spokesman)
Earlier Thursday, a police vehicle came under fire near the Rahelim Junction, east of the settlement of Ariel in the Samaria region of the West Bank. No one was hurt, but damage was caused to the vehicle.

Police and military forces were searching the area for the shooters.

On Wednesday evening, two attackers stabbed two soldiers in the Har Brakha area of the West Bank and were able to flee the scene. They are still at large as a manhunt is underway.

Also on Wednesday evening, Yaakov Siman, a farmer from moshav Talmei Bilu in the Negev, was lightly wounded in a stabbing.

It is still unclear whether the stabbing was criminally or nationalistically motivated, as the area is plagued with burglaries and it is possible the farmer came upon a robber in the act.

Siman said he saw the attacker, "a giant Arab," coming out of his cold room with a knife in his right hand and an electric saw in his left.

Siman said the man who attacked him called out "Allahu Akbar" before hitting him in the head with the saw and trying to stab him. Siman struggled with the attacker and was wounded in his hand. The attacker was then able to flee towards the moshav's greenhouses and then disappeared between the nearby trees.

Police and Border Police forces were working to find the suspect.