The screenshots mistakenly used by The Sun 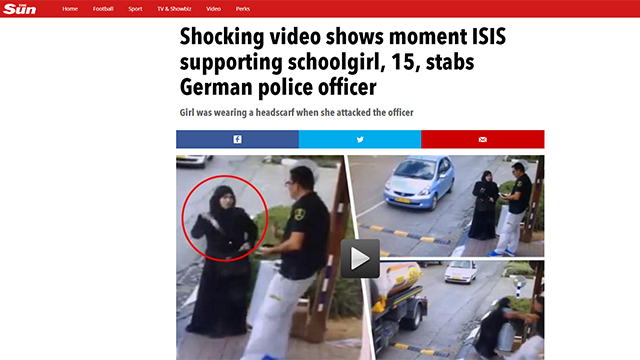 British newspaper The Sun's website published on Saturday an article claiming that footage from an attack inside Israel – at a checkpoint in the town of Beitar Illit – showed a Moroccan teen ISIS supporter stabbing a police officer at a railway station in Hannover, Germany. The Sun later deleted the article.

The Hanover attack, which resulted in the 15-year-old girl's arrest, was reminiscent of attacks on security personnel and civilians in Israel.

The 15-year-old was living for some time on the border between Syria and Turkey and was trying to join her friends in the so called Islamic State according to reports. She was detained by Turkish authorities and deported back to her mother, who lives in the German city.

The teenager had  a German passport and a criminal past, having been involved in theft and assaults.

The Sun report, which is based on a report by Breitbart UK, claimed that the teenage girl went up to a policeman in the Hannover Central Railway Station, and that "the girl can be seen fishing a giant kitchen knife out of her purse and stabbing the officer while he examined her identity documents."

The only problem was the screenshot was actually taken from security camera footage of an Israeli policeman being stabbed in Beitar Illit, not of a 15-year-old girl stabbing a German policeman inside the Hannover Central Railway Station.

The German officer in Hannover was reportedly stabbed in the neck before other police officers ended the attack.

"While the officer turned to inspect the girl's ID, with lightning speed she stabbed him," said one of the officer's colleagues to The Sun. "He didn’t have a chance to defend himself. It was a miracle he survived," the colleague continued.