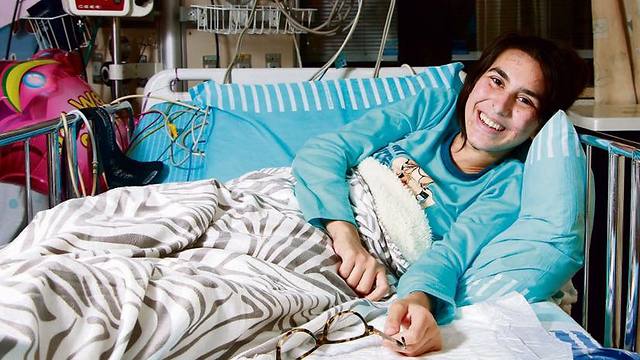 13-year-old Liam 'thinks about the attack during class,' while Bruriya 'remembers many sleepless nights,' and 80-year-old Rachel can't watch the news anymore. Almost six months into the wave of terror attacks, the wounded of the ‘third intifada’ tell their stories.

Hundreds of Israelis have been wounded over the past five months of terror attacks, many of them still recovering from their injuries. The ongoing escalation of violence began with the murder of Alexander Lebelovitch in a stone-throwing attack on the eve of Rosh HaShana. Since then, 33 people have been killed and 321 wounded: 31 seriously, eight moderately-to-seriously, 50 moderately, 14 lightly-to-moderately and 218 lightly. In addition, Magen David Adom paramedics treated 114 people for shock. Four months ago, a terrorist sped into a bus stop near Kibbutz Gan Shmuel, ramming into 21-year-old IDF soldier Orel Azuri. As she was lying on the ground, the terrorist ran over her again. Orel spent 13 days unconscious at the intensive-care unit at the Sheba Medical Center in Tel HaShomer. Doctors fought for her life for days, until they won the battle, but the road to recovery is still long.

Orel Azuri (Photo: Dana Kopel)
"I want to go back to being like other girls my age - go out, dance, and have fun. It'll take me a while, but I believe it will happen," said Orel. She has spent the past few months at the Tel HaShomer Rehabilitation Hospital. "My leg still hurts and I'm expected to remain in the hospital for quite some time for rehabilitation. I've undergone a lot of operations, I'm dealing with a serious injury, and it's not easy," she said. "Everyone around me went back to their normal lives, and while friends still come and visit, they don't as much, and that's natural." With her parents not leaving her side, Orel goes through intensive treatments - physiotherapy, occupational therapy, and physiological therapy. She spends the rest of her time watching TV, reading, and even writing a book. "I'm writing about a girl who was kidnapped and I believe the situation I'm in will affect the writing and the development of the characters in the book," she said.

'Not something you can forget'

Liam Yoteko, 13 years old from Kiryat Gat, was moderately wounded when a knife-wielding terrorist chased people on a main street in the city, stabbing four. It took her three and a half months to return to the scene of the attack. When Liam tried to recount what had happened, she was flooded with difficult memories. "I left on a walk with a friend at around 6:30pm. We saw someone suspicious and started walking faster. The terrorist pulled out a knife and started chasing us. He stabbed me four times - in the back, the leg and the stomach. He kept chasing my friend but couldn't catch him. I remained fully conscious, sat down on the ground, and tied a scarf around to stop the bleeding. I called the police and then my phone died because I was out of battery. Someone gave me their phone and I called my mom and told her I was stabbed. My dad and brothers showed up, and then the ambulance. I was hospitalized for five days."

Liam Yoteko
Liam said her physical situation has improved a lot since the attack, even though her back still hurts and she is still undergoing medical treatments and tests.

The mental difficulties, however, remain. "I hardly ever leave the house. Even for school, a five-minute walk, I only go by car. When I leave the house, it's only with my brother because he carried a weapon, and I keep looking back to make sure there's no one there. I keep thinking about what happened. It suddenly comes up in the middle of class, or while I’m with friends. I feel like I've become different, because I'm afraid to join them when they go out. I believe I'll remember this for the rest of my life and that there will always be fear in me. It's not something you can just forget."

'I lost my sense of security'

Bruriya Shenhav, 21, a student from Ariel, was wounded in a vehicular attack at the Tapuach Junction last November. A Palestinian terrorist sped towards the hitchhiking stop Bruriya was standing at, ramming into three teenage boys. Border Police troops stationed there opened fire at the terrorist and accidentally hit Shenhav.

"I remember how one second everything was quiet, and then there was a lot of noise of police and ambulances," Shenhav recounted with tears. "The entire junction was filled with troops, I felt like I was in the middle of chaos and didn't understand what was happening. It was only a few minutes later that I realized there had been a terror attack there. At first I didn't feel my injury and thought I was fine. I took a ride with one of the guys there towards Yitzhar, where my dorms are located. I remember walking into the caravan, which was empty, and all of a sudden feeling pain in my leg. I lifted my skirt and saw a huge blood stain. I felt helpless. I just sat there and started crying."

Bruriya Shenhav at the scene of the attack (Photo: Eli Mendelbaum)

Now, almost three months later, her life has changed completely. "I'm part of the statistics now, I went through a terror attack and it's a horrible and awful thing. I remember many sleepless nights, and feeling the lack of security, even to go out and walk around," she said. "As part of the healing process, I met with a psychologist to try and understand what I went through. It's a feeling, and a kind of fear, that is hard to describe. Every time I'm at a bus stop or stuck in traffic, I'm afraid that it could happen (again). After all, the terrorist in my attack probably decided he's going to commit the attack only shortly before that. It all happens in a matter of seconds, so I have a really great fear," she said.

Shenhav, originally from Tlamim in southern Israel, goes to Ariel University and lives in the settlement Yitzhar. "After the incident, my parents were really worried and we thought about leaving the place, but if you examine it you see it is happening everywhere - Jerusalem, Tel Aviv, Haifa and Be'er Sheva. It's a wave of terror attacks that is raging all over the country. People stay wounded, it's something that won't go away and will stay with me for the rest of my life. I'm beginning to rehabilitate myself and trying to have a normal life, but it's a process that takes a long time and the most important thing is this sense of security that many people have lost," she concluded.

'My soul is in torment'

Eizenkot was getting off the bus, returning from a visit to her brother's house in Rehovot, when a terrorist attacked her from behind, stabbing her.

"My sister went into the SuperPharm and I went to the bus stop to go home. Suddenly, I felt a stabbing in my back, with a very sharp pain above my waist, and I fell down onto the sidewalk. I knew it was a terror attack and that this time, I'm the one who was wounded," she recounted.

Footage from security cameras that was published hours after the attack showed the wounded Eizenkot lying on the ground as people skip over her in an effort to catch the terrorist.

"I'm not completely back to my old self yet, and I doubt I could go back to being who I was," Eizenkot said. "I'm still suffering from pain in my leg, and have a hard time walking - I can't even bend over. I now have a caretaker with me and I can't do anything without her ... I used to be independent, doing everything on my own. Now I'm very limited," she said.

Rachel also said she believes the mental and emotional rehabilitation is harder than the physical rehabilitation. "I still have thoughts and nightmares and I take tranquilizer tablets. My spirit hasn't returned to what it used to be. I keep remembering the moments the terrorist attacked me. I keep asking myself - How did I survive? Why did the terrorist stab me of all people? What did I do to have this fate? What would've happened had I died? These thoughts won't relent and it's very difficult. Physically I look almost the same, but my soul is in torment."

Eizenkot said that since the attack, she hasn't been able to watch the news. "I can't watch this. When I was hospitalized at Shmuel HaRofeh, everyone had a TV over their beds, but I left mine turned off. At home I only watch Channel 24, listening to music, and that's it. My heart aches for the young people who are killed and wounded and I can't bear to watch it. I can understand what they're dealing with."