Major poll: About half of Israeli Jews want to expel Arabs

Major Pew Center poll highlights social divisions, with different attitudes towards religion's role in the state, whether the Jewish or democratic nature of the state should be supreme, and sharp disagreement between Jews and Arabs about discrimination against Muslims.

About half of Jewish Israelis believe Arabs should be expelled or transferred from Israel, according to an extensive survey conducted by the Pew Research Center and whose results were revealed on Tuesday.

Pew surveyed more than 5,600 Israeli adults in face-to-face interviews from October 2014 through May 2015 in what it described as a first-of-its-kind poll of Israelis on a wide range of religious, social and political issues. 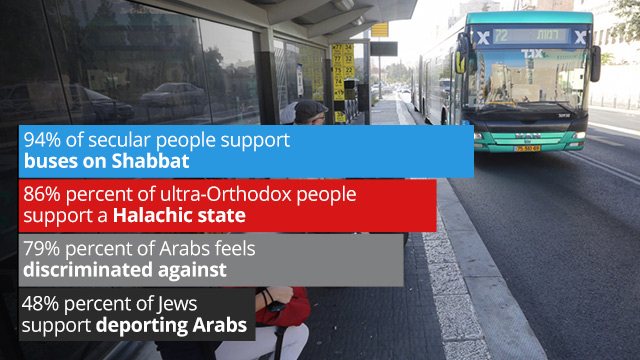 At the same time, public opinion among Jews is divided on the question of whether Israel can be a national home for the Jewish people while maintaining the Arab minority in the country. Nearly half of Israeli Jews, 48 percent, say Arabs should be deported or exiled from Israel. Religious people tend to be particularly supportive of such a move: about 71 percent agree that Arabs should be expelled.

Secular Jews tend to go the other way: 58 percent opposes the idea of expelling Arabs, including 25 who are completely opposed. But some secular Jews agree – about one third would support expelling Arabs from Israel.

The proportion of secular people remained mostly stable throughout the years, while the rate of traditional Jews - who often only display a moderate level of religious observance - dropped the most. Among the Jewish population, the biggest growth over time was among the ultra-Orthodox. Nine percent of Jewish Israelis in 2013 defined themselves as ultra-Orthodox, signifying a six percent rise within a decade.  Between 2002 and 2012, the proportion of Jews aged 20 and over who considered themselves Orthodox jumped from 16 percent to 19. 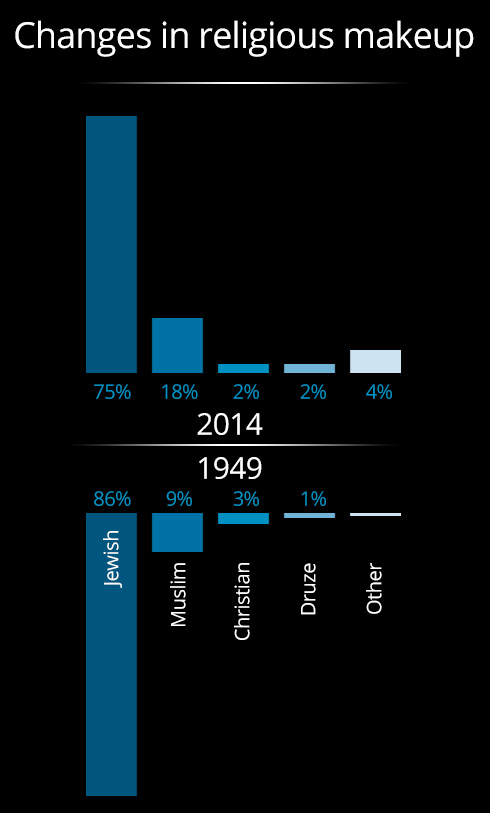 Previous studies show a drop in the rates of Israeli Jews who report a moderate level of religious observance in recent years, going down to about one third (34 percent), compared to surveys conducted by the Guttman Center for Surveys in 1991-2009, which found a rate of four in ten moderately observant Jews - meaning roughly 40 percent.

Secular Jews see their Jewish identity mostly as a matter of heritage or culture, and this reflects in their beliefs and customs. Few secular respondents go to synagogue every week or pray regularly, and 40 percent said they do not even believe in God.

Most Jews, across the religious spectrum, agree that Israel can in principle be a simultaneously Jewish and democratic state. However, they are divided on the question of what has to happen in practice when democracy clashes with the Jewish Halakha (Jewish religious law). The vast majority of secular Jews (89 percent) say that democratic principles should be given priority over religion, while the same kind of majority among the ultra-Orthodox public (89 percent) say that religious law must be given the higher spot. 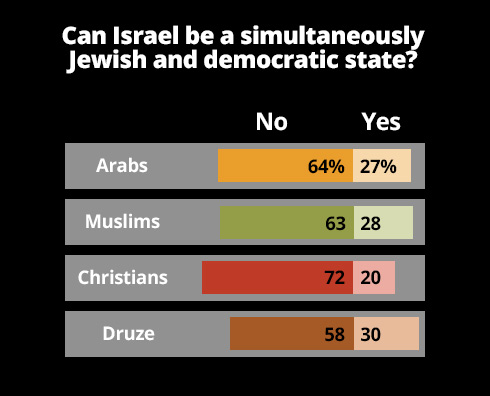 The groups are also divided on what the essence of Jewish identity is. Most ultra-Orthodox Israelis say that being Jewish is mostly a religious matter, while more secular Jews tend to say it’s a matter of heritage and culture. For some, Jewish identity is also tied to Israeli national pride. 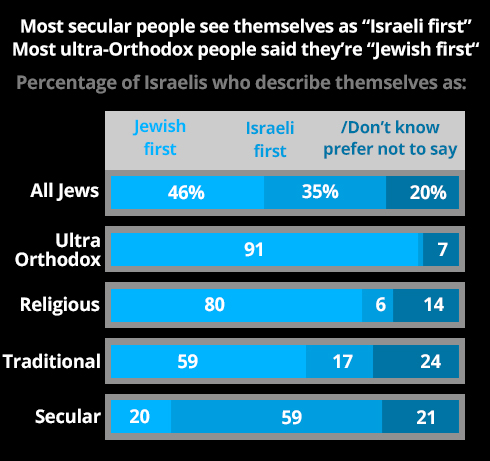 More than three quarters of Israeli Jews, 76 percent, believe anti-Semitism is common and only growing throughout the world. About nine in ten say a Jewish state is crucial for the long-term survival of the Jewish people.

Religion and the state

For example, a clear majority of ultra-Orthodox and religious Jews say public transportation should stop on Shabbat, while 94 percent of secular Jews oppose this. Traditional Jews are split, with 44 percent supporting the position and 52 percent who think certain transportation options should be available in at least some places.

he ultra-Orthodox strongly oppose allowing non-Orthodox rabbis to conduct marriages in Israel, while most secular Israeli support altering the existing law in order to permit Reform and Conservative rabbis to preside over weddings.

"This survey must be placed before the decision makers in Israel, before the government of Israel. It points to the need to address our problems at home, more than ever," President Reuven Rivlin told representatives from the Pew Center who presented him with the report on Tuesday. “When I spoke in June last year at the Herzliya Conference, about the four tribes of Israeli society, I wished to place a mirror for us to look into. Looking at us as a society, it is clear we believe Israel is – in one breath – a democratic and Jewish state. The idea that the State of Israel could be democracy only for its Jewish citizens is unconscionable and we must find a way to address this."

Rabbi David Stav, founder of Tzohar Rabbinical Organization, said that the study "serves as a further wakeup call to the position that we have been advocating for the past two decades; Israeli Jews wish to practice their Judaism but want to do so in a manner that is not coercive or manipulated by the institutions of the State."

"Most troubling, the study drives home the reality that if we don't find a manner to address these concerns over coercion, we are essentially creating a recipe for two Jewish nations within one state," he added.