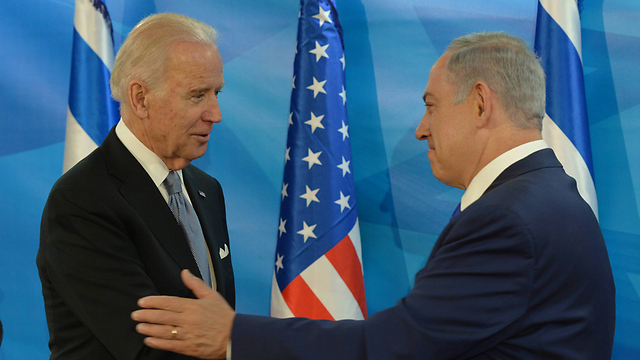 The US Vice President, in a joint conference with Prime Minister Benjamin Netanyahu, 'condemns the failure to condemn these acts'. Biden's wife and kids were eating '100 meters or 1000 meters' from where the attack took place.

US Vice President Joe Biden criticized the Palestinian Authority on Wednesday for not condemning the terror attack that took the life of an American citizen, at a joint press conference with Prime Minister Benjamin Netanyahu. “Let me say in no uncertain terms: The United States of America condemns these acts and condemns the failure to condemn these acts. This cannot become an accepted modus operandi,” Biden said during the conference.
US Vice-President with PM Benjamin Netanyahu at joint press conference    (צילום: אלי מנדלבאום)
X

US Vice-President with PM Benjamin Netanyahu at joint press conference

“This cannot be viewed by civilized leaders as an appropriate way in which to behave. It is just not tolerable in the 21st century. They’re targeting innocent civilians, mothers, pregnant women, teenagers, grandfathers, American citizens. There can be no justification for this hateful violence and the United States stands firmly behind Israel when it defends itself as we are defending ourselves at this moment as well,” Biden continued.

Biden mentioned that his wife and kids were dining not very far from where the attack took place. “I don’t know how exactly whether it was 100 meters or 1,000 meters,” he stated, “but it just brings home that it can happen, it can happen anywhere, at any time.”

Just before these remarks Netanyahu stated at the conference that “nothing justifies these attacks. But unfortunately President Abbas has not only refused to condemn these terrorist attacks, his Fatah party actually praised the murderer of this American citizen as a Palestinian martyr and a hero. Now, this is wrong. And this failure to condemn terrorism should be condemned itself by everybody in the international community.

In the wake of another confrontation between Washington and Jerusalem over Netanyahu's decision to cancel his trip to the White House, the prime minister emphasized the importance of the strong ties between Israel and the United States saying: “I believe that to fight terror, all civilized societies must stand together. And while Israel has many partners in this decisive battle, we have no better partner than the United States of America. It’s a partnership anchored in common values, confronting common enemies and striving for a more secure, prosperous and peaceful future.”