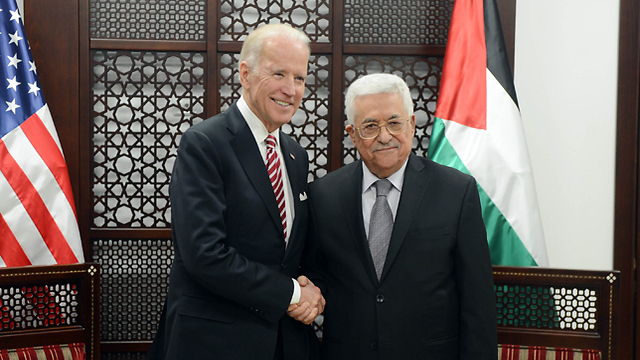 Palestinian President Mahmoud Abbas on Wednesday evening expressed his condolences for the murder of an American tourist in a terror attack the day before during a meeting with US Vice President Joseph Biden, who earlier in the day slammed the Palestinian Authority for its failure to condemn the attack.

It was the first time since the beginning of the current escalation in September that Abbas has expressed an indirect condemnation for the bloodshed. However, he also told Biden that Israel had “murdered” 200 Palestinians during those months.

Biden and Abbas in Ramallah on Wednesday

Abbas also emphasized to Biden that the key to peace and stability in the region is the creation of diplomatic prospects for a two-state solution based on the 1967 borders .

Meanwhile, Biden has entreated Israel to sign a memorandum of understanding on military aid before the end of 2016 and not wait for the next president to be sworn in. Biden said in Jerusalem that half of the United States’ defense aid goes to Israel and that the US has budgetary difficulties in meeting all of Israel’s demands. Biden further said that a situation must be avoided in which the American population is divided on the issue of aid to Israel so as not to create a situation in which Americans ask themselves why aid to Israel is increasing instead of funneling the money into Americans’ needs, such as healthcare.

Biden further said that the government has already made sure that there is bipartisan support for aid to Israel and is concerned that this support will erode if the memorandum is not signed during the current administration’s term. He added that he had the impression that Netanyahu was committed to efforts to sign the memorandum. The vice president also said that in the past, when such agreements were signed and budgetary constraints were later found, the government managed to find the money – as was the case regarding funding for the Iron dome system and the efforts to halt the threat of attack tunnels.

Biden and Netanyahu (Amos Ben Gershom/GPO)
The statement is notable in light of the fact that during discussions on the MoU, the US asked for an Israeli commitment that it would not circumvent the government and ask Congress for more funding. President Reuven Rivlin told Biden that the act of signing the MoU while Obama is still president is even more important than the actual sum of the aid.

Biden earlier met with Prime Minister Benjamin Netanyahu and then President Rivlin. Biden spoke with Netanyahu about the war in Syria, the problem of ISIS, Iranian involvement in Syria, and transfer of arms by Syria to Hezbollah. The two also discussed talks regarding reconciliation between Israel and Turkey, as well as the subject of natural gas. It was after this meeting that Biden excoriated Abbas for failing to condemn the attack.