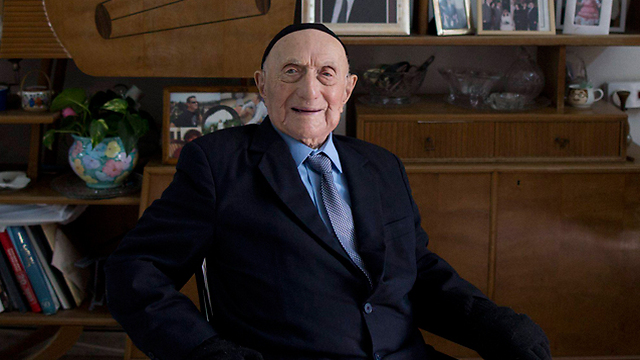 Yisrael Kristal of Haifa, 112 years old, was recognized by the Guinness Book of Records following the reigning record-holder's decease.

Yisrael Kristal was born in 1903, lost his wife and children in the Holocaust, and successfully made a new family in Israel—and on top of all that, he was recognized this week as the oldest man in the world.

The 112-year-old resident of Haifa received with restraint the official notice from the Guinness Book of Records for winning the title.

Yisrael Kristal at home in Haifa (Photo: EPA)
Kristal was born in Poland, and when World War II broke out, he was married and a father to two children. His children died of illness in the Lodz ghetto, and his wife died in an Auschwitz death march. Kristal managed to survive the inferno thanks to his talent for preparing sweets, as the Nazis had him make them candies and chocolates. After the war, he met Bat-Sheva, who had also lost her family in the Holocaust, and the two married, immigrating to Israel in 1950. They settled in Haifa, where they had three children, one of whom died in infancy. Today, Kristal has two children, nine grandchildren and many great-grandchildren. When asked what the secret to his longevity is, the supercentenarian points to Heaven. "My father is a religious man who observes the commandments and prays every morning," said his daughter. "In my opinion, what has kept him going all these years is optimism. When something bad happens, he always says, 'It could have been worse.'" Kristal, who will celebrate his 113th birthday in September, was recognized as the oldest man in the world after a Japanese man of the same age died in the beginning of the year. For the past two months, his family was gathering the documentation to prove his age. If he manages to reach 116, Kristal will enter the history books as the oldest man in history.