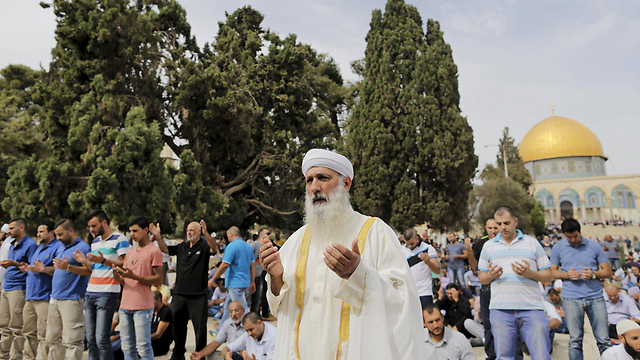 Sheikh Khaled Mughrabi is sentenced to 11 months in prison after saying Holocaust happened because Jews made 'special bread' for Passover from children's blood.

In the midst of ongoing incitement against Jews, the Jerusalem Magistrate's Court sentenced Sheikh Khaled Mughrabi this week to eleven months in prison and to an additional suspended sentence of six months.

Mughrabi was convicted on three counts of incitement to racism, and routinely delivered religious speeches at the al-Aqsa Mosque, filmed them, and uploaded some of them to YouTube. He said on one occasion that the Holocaust was a result of the Jews’ corruption and took place because they prepared “special bread” for the Passover holiday by kidnapping children, placing them in a barrel full of needles, and using their blood to make the bread. Israeli legal aid organization Honenu claims that YouTube has refused to remove Mughrabi’s inciting videos from its website despite numerous requests to delete them. The charges referred to three speeches delivered between May and July of 2015. The indictment stated that the speeches included content and ideas that were “clearly racist and antisemitic”.

Prayers on the temple mount (Photo: Reuters)
“Reading the transcripts of the speeches leaves a grim impression due to the series of lies stated by the defendant who poisoned the minds of his listeners with hateful statements,” wrote Judge Ohad Gordon in his decision. “He brought up blood libels used by Jew-haters throughout history in order to harm Jews. The defendant even broadcasted his speeches to internet users worldwide under a username representing the Al-Aqsa Mosque.” Judge Gordon added that the importance of the denunciation of Mughrabi’s incitement is “underlined by the current reality where we are witnessing the realization of the hateful potential of incitement. It starts with messages against Jews as a whole, including distorted accusations regarding intentions to ‘take over’ the Al-Aqsa Mosque, and results in the killing and wounding of innocent civilians just because of their religious or national affiliation.” “In these times, when terrorists openly say that incitement on social media and in mosques plays a significant role in motivating the attacks, it is important to punish and deter those who abuse freedom of speech in order to spew unbridled incitement,” said an official at the Jerusalem district branch of the State Attorney’s Office.

“We welcome the court’s decision to place a Muslim sheikh who incited against Jews time after time behind bars following our repeated complaints,” said a Honenu spokesperson. “Unfortunately, there are many more who incite against Jews on a daily basis and nothing is done to stop them.”

Article reprinted with permission from the Tazpit Press Service (TPS).