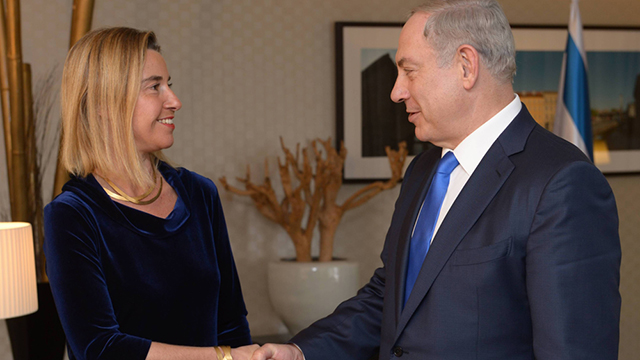 Appropriation of 579 acres near Jericho 'risks undermining the viability of a future Palestinian state and therefore calls into question Israel's commitment to a two-state solution,' EU's foreign policy service says, echoing similar denunciations by the US, Germany and France.

BRUSSELS - A seizure of land by Israel in the West Bank raises questions about its commitment to a two-state solution to end the conflict with the Palestinians, the European Union said in a statement on Thursday.

Echoing remarks this week by Germany, France and the United States, the EU's foreign policy service issued a statement criticizing Israel for its appropriation of 579 acres (234 hectares) near Jericho. "Israel's decision ... is a further step that risks undermining the viability of a future Palestinian state and therefore calls into question Israel's commitment to a two-state solution," the EU said in a statement.

Prime Minister Netanyahu, right, meets with the EU's foreign policy chief Federica Mogherini (Photo: Amos Ben Gershom, GPO)
"Any decision that could enable further settlement expansion, which is illegal under international law and an obstacle to peace, will only drive the parties to the conflict even further apart," the EU said. "The European Union remains firmly opposed to Israel's settlement policy and actions taken in this context, including demolitions and confiscations, evictions, forced transfers or restrictions on movement and access." Peace Now, which tracks and opposes Israeli settlement in territory captured in the 1967 Six-Day War, said the latest seizure represented the largest land confiscation in the West Bank in recent years. Israel says it intends to keep large settlement blocs in any future peace agreement with the Palestinians. Palestinians, who seek to establish a state in the West Bank and Gaza Strip, fear settlement expansion will deny them a viable country.

Tensions between Israel and the EU arose in November over the bloc's decision to label West Bank exports, leading Jerusalem to suspended contacts with EU officials on the political process with the Palestinians to protest the move, which Israel said is discriminatory.

But in February, Israel's Foreign Ministry announced that relations between Israel and the European Union are "close and friendly" after Prime Minister Benjamin Netanyahu spoke by phone with EU foreign affairs chief Federica Mogherini.

The two "agreed that relations between the two sides should be conducted in an atmosphere of confidence and mutual respect," the Foreign Ministry said.

Foreign Ministry Spokesman Emmanuel Nachshon said in February that the sides had "overcome the crisis" and that Israel would no longer insist on the exclusion of EU bodies from peace talks with the Palestinians over a two-state solution to the Middle East peace process.

Negotiations between Israel and the Palestinians broke down in April 2014 and there have been no signs of them resuming.

While the United States has traditionally played the lead role in peace efforts in the region, the EU is Israel's largest trading partner and is the biggest donor to the Palestinians, and is looking to play a larger role in peace negotiations

Nachshon also said Israel received assurances the move to label settlement products "is not a political step to determine future borders or to boycott Israel."