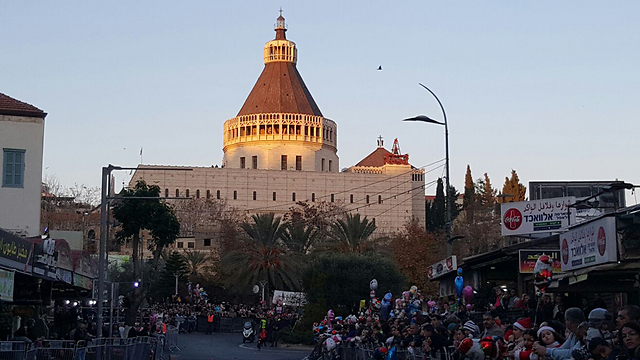 Tel Aviv and the high-tech industry are synonymous with one another, each driving and sustaining the other’s growth. For years Israel’s best known industry has benefited from young soldiers leaving the army with newly-developed skills they hope to put to use in the hip beach city, giving credence to the image of the soldier-turned-computer engineer enjoying the good life in the city otherwise known as ‘the bubble.’

This might be about to change in the face of efforts by Israel’s Ministry of Economy and Industry to encourage high-tech companies to work out of Nazareth, the capital of Israeli Arab culture and a world away from Tel Aviv.

It’s a move that could benefit both the high-tech industry and the country’s 1.6 million Arab citizens, insiders said.

“(The industry) needs more than 5000 engineers every year. Some people in the government said they could bring people from abroad to work in Israel. We said we have the human resources here, in the Arab community,” Sami Saadi, co-founder and co-CEO of Tsofen, a company aimed at boosting the number of Arabs in the industry, told The Media Line.

Traditionally Israeli Arab men have worked for the most part in agriculture and in construction and the women in education. But there are thousands of young Arab university graduates who could be earning a living in the high-tech industry, Saadi said.

Of the 120,000 people working in Israel’s high-tech sector, only 3,000 are Arabs. Yet this figure is nearly ten times the number who worked in the field in 2007, the CEO explained.

And this is good news for the industry in Israel as it allows it to better compete with companies elsewhere in the world, he added.

Benefits to the Arab community are there for the taking. The aim is to diversify the work available to Israeli Arabs and to boost levels of employment among women in the community.

Along with the ultra-Orthodox Jewish community, the Arab population in Israel consistently ranks among the country’s poorest sectors in society. This is attributable to a number of factors including the tendency among Arabs to work in lower income occupations and for only male family members to work.

Only 0.3% of managers in Israel are Arab, Reem Zoabi Abu Ishak, director of Rayan Nazareth Employment Center, told The Media Line. The Rayan Centers are part of the Ministry of Ministry of Economy and Industry’s efforts to engage Arabs in the high-tech industry.

Located in towns and cities all over the country, the centers are places where young people come to learn essential employment skills such as networking, interview techniques and resumé writing. However, the centers are more than about simply finding work for Arab citizens. Their goal is to secure higher wages for the Arab population and to enable them to get promoted within their chosen field, Abu Ishak said.

There is an ideology behind Tsofen’s objectives – a desire to achieve coexistence between Arabs and Jews – but there is also good business sense, Paz Hirschman, another of the company’s senior officials told The Media Line. “I think today it is well known that diversity in the workforce is a necessity for achieving greater innovation and creativity so this is one of our many competitive edges,” he said.

Just as important as having Arab engineers working in the industry is having high-tech companies in Israel’s Arab cities, Hirschman explained. “The main change, the quantum leap for the Arab economy and also for Israeli high-tech, is for the companies to open branches in Nazareth and Kafr Qasim, turning Arab centers into high-tech hubs.”

Before 2010 it would have been difficult to find even one high-tech company operating in Nazareth, but today there are around thirty, the CEO explained. Each new company boosts the local economy through job creation and tax revenues. A number of Jews come to Nazareth each day to work at Tsofen so interaction between Jews and Arabs is a natural consequence.

But the process is not without its problems. The Israeli high-tech industry is known to have been created in part on the basis of graduates from the Israeli army. Start-up companies formed by former soldiers from signal intelligence unit 8200 are almost a cliché.

But the vast majority of Israel’s Arab population does not serve in the army. As a result Arab students are younger when they enter higher education and have less life and work experience when they graduate. They also miss out on the networks formed by their Jewish peers during their military service, a factor that can discourage employers from hiring them.

A further problem is linguistic. The language used in much of the country’s high-tech industry is English, a second language for Israeli Jews but a third language for Arabs, who need to learn Hebrew to enter the Israeli job market and only then can think about English. Indeed, much of the work conducted at Rayan centers involves helping young Arabs improve their Hebrew.

This is the case with Nour Mahroum, 19, who has spent much of the past two months improving her spoken Hebrew at the Nazareth Rayan center. Mahroum said she struggles to speak Hebrew despite being able to read and write it, a common problem among Israeli Arabs looking to enter the workforce. “I want to learn because education is a powerful weapon to control the world,” she said.

Reprinted with the permission from The Media Line .