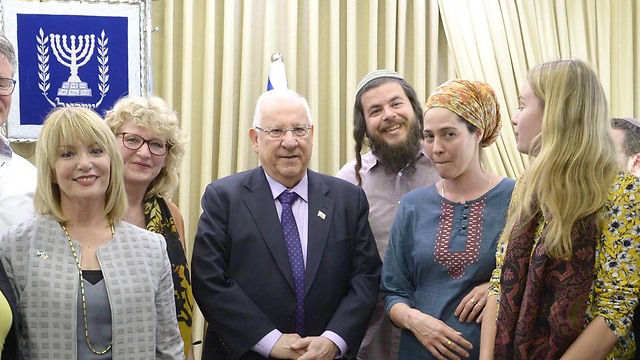 In a meeting with an organization aiding small West Bank businesses, the president emphasized Israelis' historic connection with the land and lauded economic coexistence.

President Reuven Rivlin met with merchants from West Bank settlements that are faced with an economic boycott on Wednesday night and declared, "BDS is an expression of clear anti-Semitism, manifested in a desire to harm Israel and to question its very existence."

Central at the meeting were representatives of the organization Lev HaOlam, which, in cooperation with the Samaria Residents Council, aids small businesses in the territories dealing with boycotts of their products in different locations across the world.

Amongst other activities, the organization purchases a wide variety of products every month from business owners, and sends them in packages to more than 1,000 customers worldwide. The venture exports cosmetics, olive oil, honey, Judaica, chocolate, tea and other items. "One cannot cast any doubt on our historic connection with the Land of Israel, with our country and our homeland. The boycotts are motivated by an opposition to Israel's existence," the president told the business owners.

President Rivlin with the representatives (Photo: Mark Nieman)
Rivlin continued, "One of the important things in making peace between us and our neighbors, the Palestinian Arabs, is creating and building trust, and the importance of that is everyone's ability to live well in this land and to cooperate. Joint enterprises in which Jews and Arabs work together are an example of creating this trust, and this is expressed not only in Jerusalem and Haifa, but also in Judea and Samaria." Samaria Regional Council Head Yossi Dagan said at the meeting, "We are faced with a difficult attack: an attack of delegitimization and an attack of defamation of the State of Israel. We stand strong against this attack. We bring many parliamentarians to the Barkan Industrial Park in Samaria.

"They always go inside and see Jews and Arabs working together and making the same salary, and they admire the coexistence. When we tell them that this is the coexistence that they want to boycott, they can't believe it. I promise the president: we are strong; together, we will beat the boycott."

Representatives presenting President Rivlin with a Lev HaOlam basket (Photo: Mark Nieman)
A representative of Lev HaOlam, Nati Rom, said that the boycott was indeed causing economic damage: "We have found that many people across the world refuse to recognize the State of Israel as an independent, Jewish and democratic state. The phenomenon has gotten hold of additional factories in Judea and Samaria, and many manufacturers are facing financial hardships due to anti-Semitic organizations' calls to boycott manufacturers from the State of Israel. We've seen manufacturers who have had to hide their identities, their names and their locations, and we felt a strong need to restore power and Jewish pride to its proper place." Lev HaOlam presented Rivlin with one of its packages that included handmade artisan jewelry from Shilo and Tekoa, chocolate and honey from Har Hevron communities and cosmetics from Itamar.