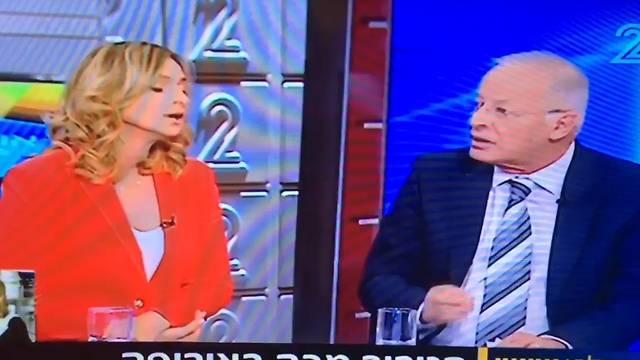 Last Friday's edition of the Channel 2 evening news saw an unusually heated argument during a panel discussion of terrorism. Journalist Dana Weiss expressed her opinion about the issue of terrorism and its possible root causes, claiming that the connection with religion and the Temple Mount was less dominant than it seems.

She also said that the division between the West and Islam was incorrect, and that the correct way to look at things would be a division of extremists and moderates worldwide. Veteran Arab affairs analyst Ehud Yaari strongly disagreed with Weiss, responding by saying that had she researched the matter, she would have realized her mistake.

Weiss objected, asking Yaari, "Why do you think I didn't check?" To which Yaari answered, "That's how it seems to me." During the discussion, Weiss seemed to heavily hint at the idea that Yaari was criticizing her interpretation of the situation due, at least in part, to the fact that she was a woman, and thus her authority on security subjects is weaker than that of men according to gender stereotypes. All four other panelists were men, including presenter Danny Kushmaro.

Weiss and Yaari during the argument.

Veteran Channel 2 journalist and frequent Friday evening news panelist Rina Matzliach expressed her support of Weiss, saying, "The women of Channel 2 have no intention of giving up their place. Dana Weiss doesn't need approval from any journalist or panel member in order to express her opinion, just as the male journalists do."

On Sunday, Yaari sent an apologetic text message to Weiss, following a conversation he had with head of Channel 2 News Avi Weiss. The two journalists later spoke, agreeing to meet and attempt to mend fences.