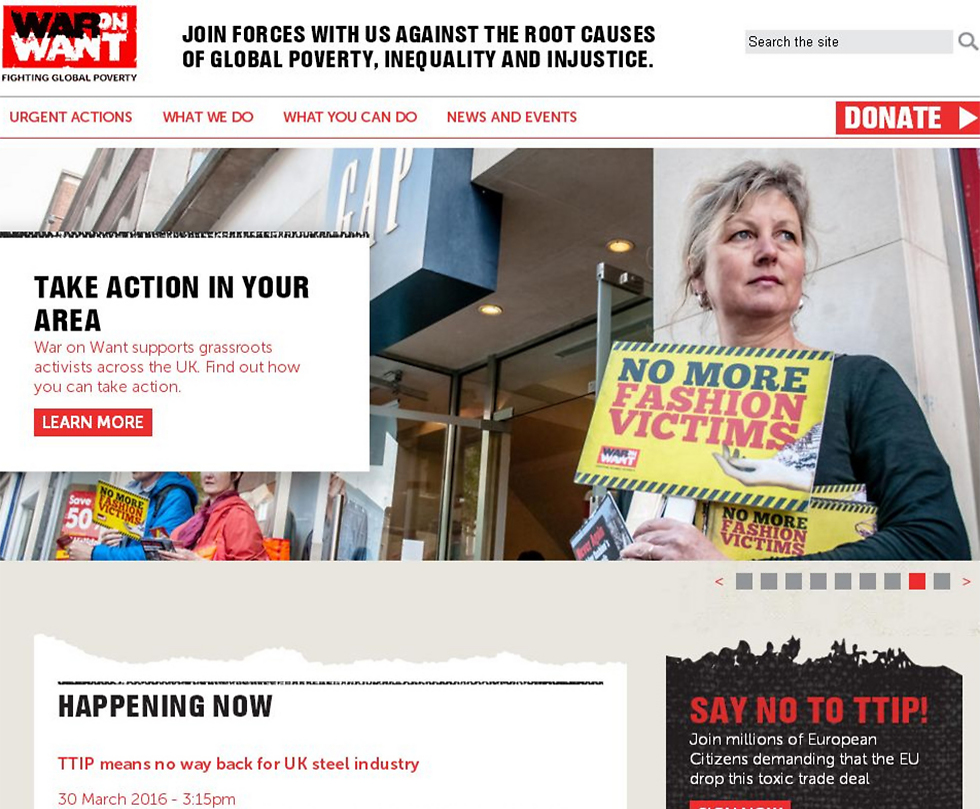 War on Want has promoted an academic boycott of Israel since 2003 and has funded Apartheid Week on various UK university campuses. The government ended its funding after the Telegraph released secret recordings of the group's activities.

The British government ended its support for the NGO War on Want, founded in 1951, and initially focused on fighting poverty around the world, for inciting to hatred and violence against Jews. War on Want has promoted an academic boycott of Israel since 2003 and has funded Apartheid Week on various UK university campuses. The government officially ended its funding after the Telegraph, a British newspaper, released secret recordings of the group's activities. In one of the recordings, Max Blumenthal, the son of Sidney Blumenthal, Hillary Clinton's former adviser, praises Hamas for murdering five IDF soldiers at a Nahal Oz outpost during Operation Protective Edge.

UK NGO War on Want's website
Blumenthal also compared Israel to ISIS and nicknamed Israel, the "Jewish State of Israel and the Levant, JSIL." At another War on Want event at London University’s School of Oriental and African Studies (SOAS), a speaker claimed that Zionists shape British public policy. At the same event, another speaker discussed rumors that Israel harvests organs of Palestinians. In the past two years, the British government has given War on Want 260,000 pounds, causing great embarrassment for the former in light of the recent revelations. The British government also made it illegal for public institutions to boycott Israel in February. An NGO Monitor report shows that the Department for International Development (DFID) transferred 500,000 pounds from 2012-2015. The EU also transferred the organization an additional 211,000 pounds. A DFID spokesperson said that Britain decided to end its funding for War on Want with the exception of a project in Northern Ireland. The spokesperson added the British government condemns incitement from both sides of the Israeli-Palestinian conflict. The director of War on Want, John Hilary, responded to the accusations against his group, "Standing up for the rights of Palestinians fits squarely with our work as a registered charity, and the Charity Commission has consistently confirmed this. For decades, Palestinians have faced systematic discrimination and abuse at the hands of the Israeli government." Gerald Steinberg, director of NGO Monitor, which works to increase transparency of NGOs, reacted to the news: "This is an important, albeit belated, step by the British government. Other institutional donors, in particular the European Union, should follow suit and immediately end their funding for this anti-human right organization." According to Steinberg the British government's decision to stop funding of the anti-Israel organizations points to a dire need to increase the transparency and review NGO funding.

BDS related news was not limited to the UK over the weekend. BDS activists tore down posters in a Paris metro station, calling on French citizens to visit an exhibition about Israel at the Louvre.

Advertising in the Paris metro for a an exhibition about Israel (Photo: Israel embassy in Paris)

The Israeli Embassy in Paris has advertised for an exhibition currently on display at the Louvre. The advertising campaign includes more than 300 points around the city’s metro. On Friday, BDS activists arrived and tore billboards at the Louvre metro station and several other stations.

The embassy began preparations for the possibility of vandalism in advance: the contract with the advertising company determined that any vandalized billboard would be immediately put up again, and so it was. The Israeli Embassy said, "Our message to the BDS groups is that they will not shut our mouths.”