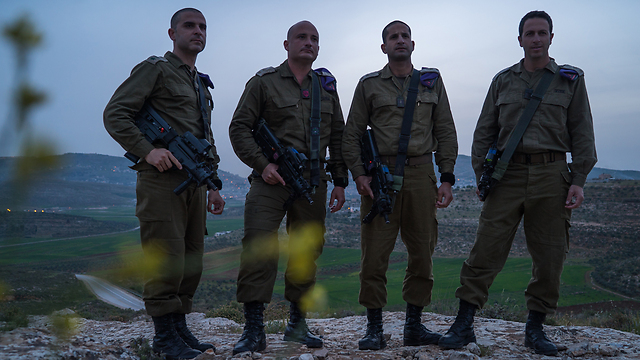 Givati's battalion commanders relate the difficulties they face out in the field dealing with disturbances from both sides as well as methods developed by brigade to successfully conclude terrorist incidents without anyone being killed.

In the wake of the recent incident in which an IDF soldier shot an already-neutralized terrorist, one that has shaken the IDF as well as the entire nation, four of Givati Brigade's commanders tell Ynet, in  a special interview, of the difficulties that characterized a terror-filled six months. The interview was conducted after a six month period of operation in the West Bank, at the height of the third intifada. The meeting with the battalion commanders took place last week on the summit of Mount Kabir, which overlooks Nablus and is near the lone road leading to Elon Moreh, where the terror wave began with the murder of Eitam and Na'ama Henkin last October.

A few hours before the interview with the commanders the shooting incident in Hebron took place in an area that was previously manned by battalion commander, Lt. Col. Kobi Barel. "It is an unethical and extremist act, and we don't train our soldiers to act that way," he says. "There were hundreds of similar cases and we did not see results like that happening. A scene like that draws fire, media and crowds. That is why the scene needs to be closed off, isolated and the body cleared away as fast as possible."

A day later it became clear that three of Kfir Brigade's officers delayed handling the terrorists and they were reprimanded. The Givati battalion commander had a few exceptional incidents against Palestinians in recent months, and talked about methods that were developed by brigade to successfully conclude terrorist incidents without anyone being killed.  "Palestinians stand behind red lines we draw on the ground, they are checked from there in order to maintain a safe distance from the soldiers. That way a terrorist who attacks with a drawn knife has no advantage. Our soldiers took their positions after short training sessions in krav maga (Israeli hand to hand combat method- ed.) and shooting drills. We called this warming up before a mission, this strengthened and sharpened our infantrymen," he explained.

According to the testimonies of Kfir Brigade soldiers, the soldier from the Shimshon battalion fired emotionally after he told the platoon commander and his friend that "we should kill the terrorist who stabbed my friend". In Givati, probably as a preventive measures for such situations, many discussions were held about instances and dilemmas between commanders and their soldiers. "Squad and platoon leaders talk to soldiers about little incidents that happen, so that they can vent their emotions."

(Photo: IDF Spokesperson)
The discussion with the battalion commanders reveal the IDF's transformation over the past year regarding the conceptualization of managing the territories in the West Bank. The discretion used to save the Palestinian population's fabric of life of is integrated and receiving greater weight in operational activity, and in the tactical decisions that are received in the intensive assessments and those that are held after attacks.

The shooting soldier (Photo: Moti Kimchi)
"The battalions entirely revamped their approach to how they approach keeping law and order. We put borders in conflict areas," Barel said. Rotem battalion's commander, Lt. Col. Liron Betito experienced this firsthand, who, after the attack in his area where the Henkin couple were murdered, sent forces to protect the Palestinian's annual olive harvest near the settlement area. "We grew white hairs after that," admitted Lt. Col. Betito. "We operated with a clear policy , the Palestinians harvest olives until the last tree, and this created friction".

In the neighboring area, west of Nablus, Lt. Col Nir Ben Hamo was in charge of the brigade's reconnaissance battalion. There the infantrymen faced the conflict between the Palestinians and settlers in the Yitzhar area. "He handled fits of rage from settlers, but we also had commanders in the area in these events, and we play a part in controlling these kind of events. We arrested people who tried to damage the other side in a way that could fan the fire. We did not allow innocents to get hurt."

Removal of the terrorist from Hebron (Photo: AFP)
Givati Brigade hammered the Palestinian terrorists day and night with hundreds of arrests. Lt. Col. Betito recalls the evacuation of the Jewish worshippers who sneaked into Joseph's Tomb in Nablus at night, during the peak of the incitement. "At 2am I got alerted because worshippers entered Joseph's tomb in a vehicle. We quickly drove over there with what we had, just four vehicles. At the entrance to Nablus we were stopped by a Palestinian police checkpoint. They refused to let us pass. After talking to them we crossed the checkpoint and proceeded to the tomb," he recounted.  He said there were hundreds of Palestinians gathered around five Jews, and armed Palestinian police officers aiming their weapons at his soldiers. "I immediately recognized the senior Palestinian police officer in the area, we calmed the situation down, but it was surreal. Eventually we safely rescued the worshippers," he concluded.   The commander of Shaked battalion, Lt. Col Eyal Schwimmer, remembers the shooting attack at the checkpoint at the entrance to Ramallah where two Shaked infantrymen were wounded. "The Palestinian Authority agent drew his pistol from his vehicle, a pistol instead of his ID, and fired five bullets at them. He continued to drive towards Beit El. The event ended when soldiers who were injured in addition to another soldier at the checkpoint, fired towards him despite their injuries and killed him. We are talking about soldiers in the training platoon, they were barely nine months in the military." It seems that the battalion commanders, who live the complex reality that exists out there, are more proficient than the top brass in the nuances that will influence the terror wave. "The less success the lone wolves have, the less copycat attacks will happen. The easiest thing is to close off areas, but restraint is strength. We also allowed the fabric of life in Hebron to continue and no Palestinian stores were closed after the attacks. Another Defensive Shield is not relevant at this time. " The battalion commanders rebut the claims, especially made among some on the right, of a soft hand towards firing at Palestinians. "When a terrorist comes to attack a soldier or citizen, the infantryman must immediately neutralize him. During disturbances it is different, and it should be handled with no fatalities on the other side," Lt. Ben Hamo said. Lt. Col. Barel said that "we encountered many incidents that could have ended up with dead Palestinians but it was still within the rules of engagement."