Netanyahu dares Abbas to meet: 'I’ve cleared my schedule for the week'

Following Palestinian President Mahmoud Abbas' declaration to Israeli journalist of his willingness to meet Netanyahu 'at any time', the latter states 'any day he can come, I'll be here'.

Prime Minister Benjamin Netanyahu took advantage of his meeting with the Czech foreign minister to challenge Palestinian President Mahmoud Abbas on Monday to pay him a visit.

“President Abbas said on Israeli television a few days ago that if I invite him, he’ll come,” Netanyahu told Czech Foreign Minister Lubomír Zaorálek, according to a statement from the Prime Minister’s Office. “I’m inviting him. I’ve cleared my schedule for the week. Any day he can come, I’ll be here.”

“The first order of business will be ending the Palestinian campaign of incitement to murder Israelis,” Netanyahu added. “My door is always open for those who want peace with Israel.” 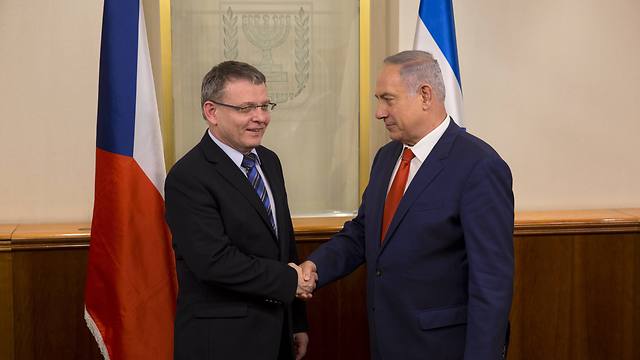 Last week, Abbas said in a televised interview with Israeli journalist Ilana Dayan that he would be willing to meet Netanyahu “at any time” to negotiate a peace settlement.

“I suggested to him to meet, by the way,” Abbas continued, before stopping himself mid-sentence. “No, no, it’s a secret. He’ll tell you,” he chuckled, going silent at Dayan’s requests that he elaborate.

This is not the first time Netanyahu and Abbas have accused one another of refusing to meet.

Abbas told Israeli journalists in January that a meeting between the two men was arranged and he “agreed and haven’t heard any response from Netanyahu ever since.” Netanyahu’s spokesman, however, called this account “not true.”

Netanyahu dared Abbas that same day at the World Economic Forum in Davos to meet him during an interview with CNN”s Fareed Zakaria.

“I say, okay, you know what Fareed? Issue the invitation to Abu Mazen, President Abbas, and it will give me an excuse to stay in Davos a long time, and we’ll just wait until he comes. Okay?” Netanyahu announced. “I’ve said it any place that I’ve been and he’s refused to come. And that remains the problem.”