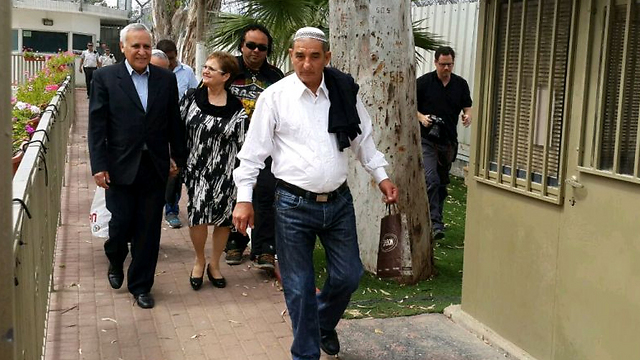 The former president, currently serving a seven-year sentence for rape, will remain in jail; his attorney, Zion Amir said he would appeal the decision.

Former president Moshe Katsav's request to be released early from prison was denied Wednesday afternoon. He is currently serving a seven-year sentence for rape.

The parole board next to the Prison Service held a discussion which started at 10am to deal with Katsav’s request to deduct one third of his seven-year prison sentenced for sexual offenses. After two hours of discussion, it was decided that he will remain in jail.

Katsav, who has already spent 4 years and 121 days in prison, took the decision with great pain and returned to his cell. His attorney Zion Amir, said that he would appeal of the decision.

The committee stated that "the prisoner perceives himself as a victim, busy blaming external factors for his condition, is still behaving in a forceful manner and his absorbed with his needs, losses and the price that only he and his family has paid. Even in light of the commission's questions, the prisoner did not express remorse or empathy for his victims, but reiterated the he has paid and continues to pay a heavy price.”

The committee members summarized with, "The prisoner before us denies the crimes he committed, continues to claim his innocence despite the court rulings in the case, and continues to be busy proving his innocence in the manner he expressed it to us, as if there was no legal procedure at all.

"The courts explicitly stated that these are serious offenses and noted the seriousness of these attacks on the victims. The victims brought their objections to the release council, and different legal opinions were consulted regarding the decision. The committee members believe that the private program will not have the power to stop (Katzav's) poor conduct, his obsessive claims of innocence, or even (stop) his continued attacks on the victims," they concluded.

Katzav’s lawyers, Zion Amir and Yehoshua Reznik, said in response, "The decision is 20 pages long, maybe a bit more; we will examine it, and will of course appeal the parole board’s decision. What we retained from the main decision is the question of his innocence, a fundamental right, a constitutional right to adhere to one’s faith and innocence. I regret very much that our society and its decision makers are enslaved to the winds blowing outside which leads to these types of decisions.

On December 30 2010 Katsav was convicted of two counts of rape, sexual harassment, indecent acts and obstruction of justice. He was sentenced to seven years in prison for rape and other sexual offences.