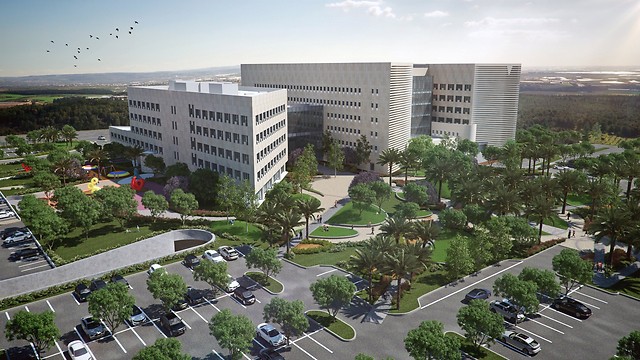 Candidates for Aliyah with medical backgrounds recently attended an event in New York hosted by the directors of a new state of the art hospital being built in Ashdod, in partnership with Nefesh B'Nefesh.

Israel currently has a shortage of doctors, and is looking abroad at potential new immigrants to help fill the gap.

"If you're considering making aliyah, it's important to keep the security situation in mind. We're 16 miles from Gaza, but we're building a facility that can handle the threats and crises that affect our day-to-day lives. The hospital is fortified against rockets which will enable us to work during emergency. It’s the first hospital in Israel protected in this manner."

"And how much will we make?" asked one of the doctors at event to try. "Not enough."

This perhaps wasn't the passionate Zionist speech that these doctors were expecting to hear - especially at an event whose goal is to convince people to leave their homelands to move to Israel and work in the new hospital in Ashdod.

Yet, according to the organizers of the event - Asuta hospital network CEO Shuki Shemer, and manager of the new hospital in Ashdod, Professor Chaim Bitterman- it's important to not mislead these doctors and medical staffers about the realities of working in Israel.

They're interested in doctors who will come to Israel to settle, and who won't leave because of the hardships. .

An ecologic and digital hospital

Bitterman and Shemer's decision to turn to Nefesh B'Nefesh was borne out of a love of Zionism, and due to a shortage of doctors in Israel. The idea for the event began with a telephone conversation between Shemer and Rabbi Yehoshua Fass, the founder and CEO of Nefesh B'Nefesh, which specializes in facilitating Aliyah from North America. "We're building a new public hospital in Ashdod and we don't have enough doctors," Shemer told the rabbi. "Our goal is for at least 20 percent of the hospital staff to be new immigrants, specifically from France and the US," Professor Bitterman added in the call to the rabbi.

Rabbi Yehoshua Fass, the founder and CEO of Nefesh B'Nefesh, was really pleased with the amount of interest. "We are helping people realize their dreams while at the same time helping the State of Israel deal with its shortage of doctors. This is a new level of Zionism – bringing dozens of doctors to the south."

At the event, Professor Shemer exclaimed proudly "There is going to be a public health revolution in Israel. We're building a completely new public hospital, from top to bottom. This will be a very modern hospital, completely fortified from rockets, biological, and chemical weapons. "

The hospital is expected to open sometime between next January and may, and 1200 people will be employed there, including 200 doctors, and 450 nurses. There will be 300 beds during the first stage, and then 600 in the final stage, and it will serve between 350,000 to half a million residents. We are offering you to be part of this project and our vision," Professor Shemer continued.

The hospital is expected to present integrate their services into the community, with medical information will be passed easily and seamlessly between the National Health Care and the hospital. "The goal is to eliminate redundancy and confusion" Bitterman said. "We invite all of you to join in our efforts to succeed."

They're not coming to Switzerland

The Israelis didn't hide the harsh Israeli reality from the prospective doctors, specifically regarding the low salaries and uneasy security situation. "We have to be honest with them," Shemer said. "You don't want to create a high level of expectations in order for them not to be disappointed. This is how it is in Israel. There isn't a lot of money in medicine, and anyone who makes aliyah needs to understand that they are coming to work in Israeli conditions." Regarding the security situation, Shamer explained that "as Israelis, we know that there's no real 'safe space.' We need to tell the truth to their faces. We aren't bringing them to Switzerland."

New hospital in Ashdod under construction (Photo: Oded Karni)
Despite the hardships, many doctors are willing to leave their lives in the US and move to Israel. "I've thought about making aliyah for 40 years, but I never went through with it because my family is here and my parents were against it," say Gary Oren, 61, who practices internal medicine and specializes in nephrology. "My mother passed away seven years ago, and three years ago two of my sons made Aliyah. I said to myself that if I'm going to re-invent myself, I may as well do it in Israel."

Doesn't the security situation worry you?

Steven Eagle, 35, pediatrician, also isn't worried. "It's less scary for me to walk around the streets of Ashdod than the Bronx. There are a lot more shootings and stabbings there than in Israel. Also, there's no where else I'd rather raise my five kids. It’s a spiritual issue. I wouldn't move to Israel because of work, but when there's a chance to work in a place like this (new hospital in Ashdod- ed), it really helps facilitate the transition." Professor Markus Levy, 57, is a Jewish doctor from Venezuela who moved to the United States in 2000, and is a gastroenterologist who specializes in pancreatic surgery. "I learned Hebrew online," he said, not bothering to hide his excitement. "I wanted to go live in the north and practice medicine at Rambam Medical Center (in Haifa –ed.) because it's far from the rockets in Gaza. However, after I spoke to someone who works there, he told me that if there's a war in the north, it'll be a lot worse than war with Gaza. I'm not afraid. If I could have turned back the clock 16 years, I would have made aliyah straight away instead of wasting 16 years in the US. Sadly, I've lost both of my kids in the US – they've turned completely American and even support the Palestinian cause. Its something that really hurts."