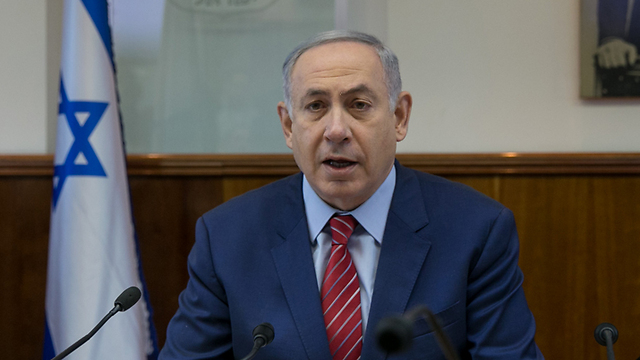 Prime minister says 'determined, responsible and systematic policy led by the government' and implemented by Israel's security forces has lowered terrorists' success rates, dissuading others from joining them.

Prime Minister Benjamin Netanyahu said Sunday that according to the Shin Bet, there has been a significant drop in the number of terrorist attacks. "Today the cabinet will hear a Shin Bet briefing that shows a significant decline in the scope of terrorist attacks. I say this with great caution because this trend could reverse itself," Netanyahu said at the beginning of the weekly cabinet meeting. He cited "strong, responsible and methodical policy" as the reason for the decline, commending the IDF, Shin Bet and the Israel Police for implementing this policy. "The combined offensive and defensive effort has led to the terrorists succeeding less. The main element leading the spread of terrorism, both here and elsewhere, is success. To the extent that we reduce the success rate, we reduce the number of those joining, and this is the main thing that we are doing," Netanyahu noted.

Among these offensive efforts, the prime minister said, are "very strong actions against the incitement of the Palestinian public."

Netanyahu also warned of attempts by the leader of the outlawed northern branch of the Islamic Movement, Raed Salah, to inflame tempers on the Temple Mount ahead of Passover. "This man is a one-man explosive," he said. "I demand security forces and the justice minister to act to ban him (from the Temple Mount). That man should've already been in jail."

The Shin Bet told government officials that there has been "a significant and noticeable drop in the number of terrorist attacks committed by Palestinian terror elements, including significant attacks."

There have been 20 attacks defined as "significant" in March 2016, compared to 78 in October 2015. So far in April, there have only been three such attacks.

"The main reason for the significant drop in the number of attacks is the extensive thwarting efforts by Israel, the effective thwarting of attacked planned by Hamas - which significantly increased its efforts to execute attacks, including kidnappings and suicide bombings, effective deterrence efforts to prevent additional attacks and very strong actions taken against Palestinian incitement," the Shin Bet said in a statement.

According to the Shin Bet, these actions left the impression among the Palestinians, particularly the "lone wolf" attackers, that the escalation of violence is hopeless.

A little over six months since the eruption of hostilities on October 1, Palestinian terrorists have committed some 270 attacks and attempted attacks that were defined as "significant" - most of them shootings, stabbings and vehicular attacks. Twenty-nine Israelis and four foreign nationals were killed in the attacks, while some 250 additional Israelis were wounded.

Most of the attacks, according to the Shin Bet, were committed by "lone wolves," mostly young people - some for nationalistic reasons but most for personal reasons, such as their economic situation or issues in their personal lives.

Meanwhile, terror organizations, primarily Hamas, have been trying in recent months to execute terror attacks in the West Bank and in Israel in order to further escalate the situation, the Shin Bet said.

The Shin Bet and other branches of the Israeli defense establishment have thwarted over 290 attacks since the beginning of 2015, most over the past six months, including 25 attempted kidnappings and 15 attempted suicide bombings.

In addition, the Shin Bet noted that efforts to thwart Jewish terrorism, including the arrests and indictment of the suspected perpetrators of the Duma murders and other "price tag" attacks, have contributed greatly to calming the situation.

Despite that, the Shin Bet noted there is still a lot of tension on the ground and there are different elements - mostly Palestinian terror elements - who are constantly working to destabilize the situation.