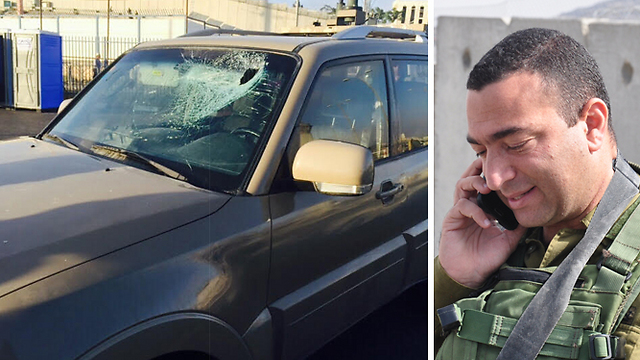 Colonel who killed a boulder-thrower acquitted

The IDF prosecutor's office decided on Sunday to close the investigation into the actions of the head of the Binyamin division, Colonel Israel Shomer, who shot and killed a Palestinian who threw a boulder at his car.

On July 3, 2015 a Palestinian from Qalandia threw a boulder at the Colonel's windshield. It went through the windshield and entered the car. In response, Colonel Shomer got out of his car and initiated the proper use of rules of engagement.

However, the investigation revealed that Shomer shot at the Palestinian while he was in motion, and not from a static firing position. Therefore, his shots weren't precise, and he ended up killing the Palestinian.

The Chief IDF Prosecutor determined that the Colonel's shooting under the rules of engagement was justified, as their intended use was to arrest the Palestinian. The prosecution also found that although firing while moving and not from a static position was a professional error, the extenuating circumstances behind the event are what caused this transgression.

Therefore, "the shooting incident did not cross the line into criminal activity, and therefore does not necessitate legal action against the officer."

Only part of the incident was captured on security camera footage, and the shots which killed the Palestinian weren't captured on film. According to Judea and Samaria Division Command, live fire may only be used if the soldier's life is in danger.