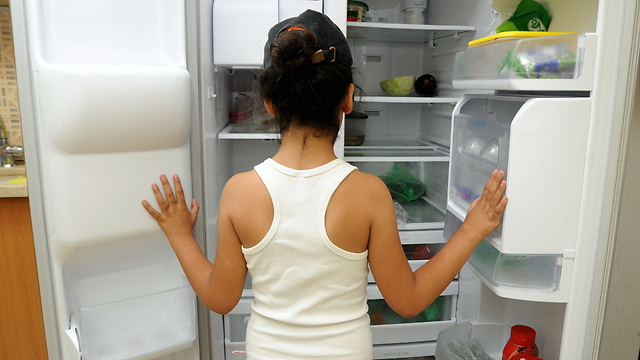 A new UNICEF report reveals that Israeli children are not only the poorest children in Western countries, but their parents also suffer from the greatest income inequality.

They don't go to friends' birthday parties because they cannot buy gifts. They don't participate in extracurricular activities or tell their parents about school trips in order not to upset their parents, who cannot afford to pay for such programs. Sometimes they go to bed hungry and fear they will not have anything to eat.

The most difficult aspect of their life is that they feel they are worthless and hopeless. UNICEF's new report reveals that Israel's children are not only the poorest among children in Western countries, but also their parents suffer from the greatest income inequality.

The report presents an overview of inequality and well-being of children in 41 Western countries between 2010 and 2014, compares children at the bottom of the poverty line to middle class children, and finally examines how low we let them fall - in terms of income, health, living conditions, and education. According to the data, Israel lags far behind other Western countries.

"All children deserve an equal opportunity to reach a fair start," write the authors of the report. "Social inequalities among adults may be justifiable if they have arisen through fair competition and under conditions of equality of opportunity. But when it comes to children, the social and economic circumstances they face are beyond their control, and so differences in merit cannot reasonably be advanced as justification for inequalities among them. In addition, few dispute that childhood experiences have a profound effect not only on children’s current lives, but also on their future opportunities and prospects. Likewise, social and economic disadvantages in early life increase the risk of having lower earnings, lower standards of health and lower skills in adulthood. This in turn can perpetuate disadvantage across generations. None of this is the fault of the child."

The level of inequality among Israel's children in terms of health stands at 38 percent. Almost one third of children in Israel complain about physical ailments such as headaches, sore throat, abdominal pain, irritability, difficulty falling asleep, dizziness and other undiagnosed pains.

Education in Israel is ranked 33rd out of 37 OECD countries according to the Program for International Student Assessment (PISA) tests, which evaluate literacy, mathematics, and science.

Israel's children also scored poorly in life satisfaction. The gap between the poorest children and middle class children is among the highest in the Western world - ranked 31st out of 35 countries. Despite a small improvement compared to the 2002 UNICEF report and a two percent increase in the 2010 UNICEF report, the gap between Israel's wealthiest and poorest children increased.  7.7 percent of Israeli children reported a satisfaction level of 4 or less on a scale of 1 to 10, while the average child in most Western countries reports a satisfaction of 8.

"We are talking about a term called the sticky floor - the policy and social behavior leaves the lower classes low and does not allow them to climb and to improve their situation," says Jonny Cline, UNICEF Israel chairman. "The situation in Israel is the result of policies that were used for years - but what the data in the report shows the ability of policies to influence the hope for the future and the possibility to change this trend." The report demonstrates how other countries have reduced disparities and granted their children, born in lower socioeconomic classes, more equal opportunities. For instance, Japan has made long-term investment in child allowances, allowing less fortunate layers of its population to fend off poverty.

Meanwhile, Israel still has not managed to overcome political debates to ensure future improvement. The political immaturity and unwillingness to overcome political factionalism have prevented Israel from taking the bold steps required to confront this crisis. Israel has a huge pool of data to draw from other countries and can understand from it what has been effective in reversing these negative trends.

"It is important to understand that it is not that the rich that are getting richer as the poor become poorer, it's just the opposite. As the poor are getting poorer, the strength of the strongest is also damaged. UNICEF does not come as a regulating body, but as a body that reflects the comparative situation. When Israel signed the CRC, it promised to improve the situation of children in Israel and fulfill their rights. We are here to help Israel implement programs that will enable it to meet this promise.The red flags have fluttered for decades, and now it requires a governmental decision to create a master plan for future generations, to improve the situation in cooperation between the state and the citizenry," said Cline.

The leader of the report, Dr. Sudhanshu Handa, the chief of the Social and Economic Policy Unit at the UNICEF Office of Research, also hopes to see reform in the national programs. "This (report) allows countries to compare themselves to countries that are in the same economic environment and examine their policies," he explains. "For working purposes, we collected the information from databases that exist in every country and we have built an indicator that reflects inequality."

"In education, for example, we examined the results of the PISA tests conducted worldwide among students aged 15. For the fields of health and life satisfaction index we used the HBCS, the international survey on the welfare and health of youth," Handa said.

"This research which is carried out every four years among children aged 11, 13 and 15 around the world explores topics such as relationships with friends, family, use of social media, alcohol use and smoking, eating habits and physical activity, life satisfaction and satisfaction from education. The interesting part of this year's report is that in three of the four examined categories - health, life satisfaction and education - the information was obtained from the children themselves," he added.

What is the most important thing we can learn from this study?

"Some countries did better than others in maintaining low gaps between poor children and middle-class children. In other words, governments can make a difference for children with social policies. Countries or countries that have changed social policies in the health sector have seen significant improvements in healthy eating habits of children and measures of physical activity. In education we found that inequality diminishes - the kids at the bottom come closer to the children at the center," Handa said.

Why has Israel fallen to the bottom of the list in many categories?

"Israel is really far behind in all categories. Israel has a unique context and some of the reasons are known: it is the minorities who study in various different settings such as the Arabs and the ultraorthodox. But every country suffers from such incredible inequalities. Israel should give this some consideration. Even in my country, the United States, this is a very important issue. We see children who come from a poor background go to poor schools that perpetuate poverty," he continued.

What can we do better in Israel?

"We need to make sure that there is a good system of integration. Sweden recorded a significant increase in inequality and the reason is the growing immigrant community. I'm not an expert on Israel, but Israel must examine from which countries it can learn. In the United States, for example, there is a program called Headstart, which aims to prepare pre-grade school children of lower socioeconomic classes for grade school. When they reach the first grade at the age of five, they already know how to read," Handa said.

Giving up on the poor

Israeli experts know the consequences of an impoverished childhood and increasingly large socioeconomic gaps. "The damage is done not only in terms of physical development, but also psychological (development)," says Professor Asher Ben Arieh, a child welfare expert at the the Hebrew University's School of Social Work and the director general of the Haruv Institute."The emotional harm is dramatic. IIf they can, they will wear second-hand clothes and reduce their diet. But they (suffer) psychological harm caused from having less than others is difficult to repair."

"It affects their self-confidence, their ability to develop relationships with others, and their willingness to be part of society. When a child lacks self-esteem, he feels that he cannot lead a healthy lifestyle and his aspirations subsequently narrow. When we raise a large group of children who believe they're destined to be laborers or uneducated, the impact on society is devastating. "

However, Professor Zvi Eckstein, director of the Aaron Institue Economic Policy at the IDC in Herzliya, is rather unmoved by the data in the report: "When one compares Israel to other OECD countries, one should examine the number of children that Israel has compared to other countries. We, in Israel. are unusual in this respect. In other countries, the average family has a child and a quarter, Israel has more children per family, even among secular families, and especially in the Arab sector and even more in the ultra-Orthodox sector. This is a choice of the Israeli population. And because we do not earn more than most countries, we have more poor children," he said.

"What is also remarkable is that our poorest group has a tendency and preference to give birth to more children. When the number of children in the poorest group increases, the gaps do as well. If you look at the Gini Index (the inequality index) in Israel - it is close to that of the United States, as our population growth rate is 2.8 times greater than the US.

"If the United States had the same number of children as Israel, it would be ranked similar to us. The inequality indices are also higher here than in others because the Haredi population is investing less in vocational education. Moreover, the state's small investment in the Arab sector, and their access to the labor market, infrastructure and education (has contributed to this issue)," he concluded.