Natan and Renana Meir in the US 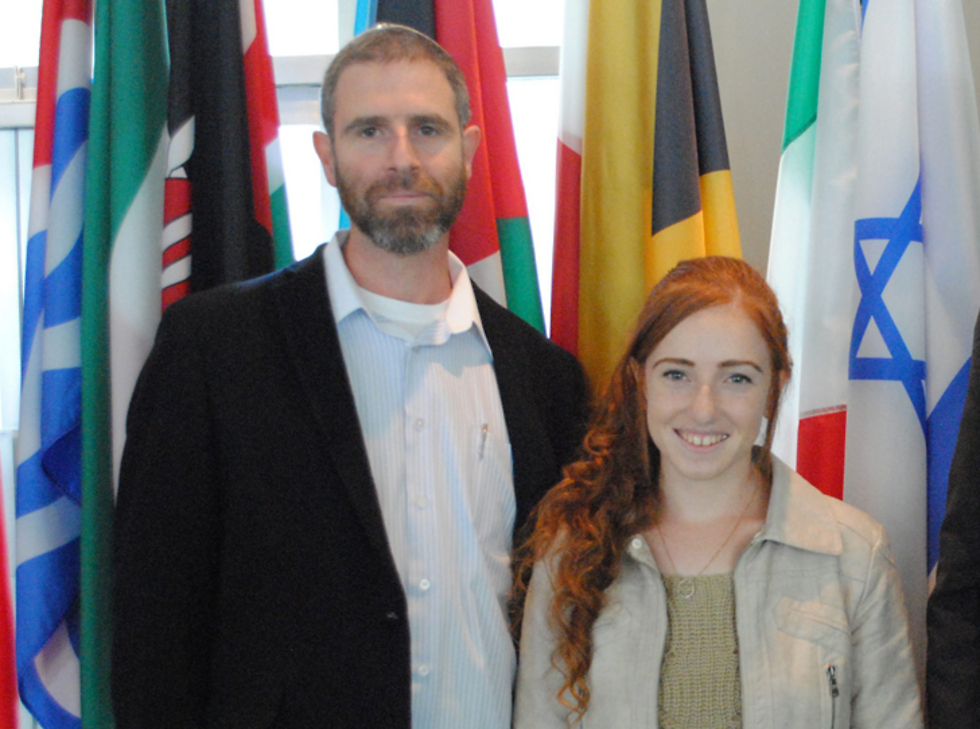 Slain Israeli Dafna Meir's husband and daughter are in New York to address the UN on Monday; Israel's ambassador to the organization hopes to expose its hypocrisy to victims of Palestinian terrorism.

After Renana Meir witnessed a Palestinian terrorist murder her mother, Dafna, she will stand, along with her father, Natan, before the United Nations in New York on Monday to speak about the realities of terrorism for Israeli victims.

The UN building in New York was built to symbolize the unity of the worlds' nations and their shared struggle for the improvement of their lives. In recent years, it has become a symbol for pro-Palestinian sentiment and an arena in which decision are consistently taken condemning Israel while ignoring the reality on the ground, for Israel in general and for the victims of Palestinian terrorism in particular.

Currently, in one family that experienced Palestinian terrorism in the hardest possible way is coming to that very same building to tell the world clearly and unequivocally: "Hear our pain; stop supporting terror."

On January 17, Dafna Meir, 38, stood at the entrance of her home in Otniel together with her 17-year-old daughter, Renana. Suddenly, she was attacked by a 16-year-old terrorist armed with a knife. With the strength that she could muster in her final moments, Dafna fought off the terrorist to prevent him from entering her home and harming her five other children, who were sleeping inside. Finally, the terrorist fled, and Dafna died. Two days later, he was caught in his home in a village near Hebron and was indicted for murder.

Even the shocking murder of Dafna Meir—which was only one of the dozens of terror attacks and attempted attacks carried out in the latest wave of terrorism—was not enough to receive a condemnation of terrorism from the UN. On the contrary, a little more than a week after Meir's murder, UN Secretary General Ban Ki-moon appeared before the Security Council and revealed his understanding of the attacks against Israel. "It is human nature to react to occupation," he said. "Palestinian frustration is growing under the weight of a half century of occupation and the paralysis of the peace process. Some have taken me to task for pointing out this indisputable truth."

This is the reality that Renana Meir and her father will seek to change. They arrived in New York at the end of the week at the invitation of Israel's Ambassador to the UN Danny Danon and One Family Together, an organization which is dedicated to assisting terror victims and their families. The two are expected to take part in the discussion in the UN tomorrow and discuss the issue of terror.

The late Dafna Meir and her husband, Natan
After the two Meirs arrived in the United States, they met with Danon before their visit to the UN. They shared their visit's goal and their intention to make the voices of victims of terrorism heard before the world's representatives. "With a pained and bleeding heart, we have come to ask for the international community's understanding for the victims of Palestinian terrorism," they said. They further hinted at the secretary general's controversial past remarks: "We hear those who say that it comes out of frustration—but we ask, haven't we great frustration of our own?" Israel has officially protested numerous times to the fact that terror attacks against Israelis do not merit condemnation by the UN, while other terror attacks around the world (such as those in Paris last November or in Brussels three weeks ago) receive harsh and detailed condemnation. According to Danon, after the Paris and Brussels attacks, the Security Council published no less than 12 messages of condemnation, but its treatment of the victims of terrorism in Israel is completely different. "The council refuses to condemn Palestinian terrorism, which has taken 34 Israeli victims since the beginning of the current wave of attacks," he said over the weekend to Yedioth Ahronoth. The ambassador repeated the Israeli claim that the UN was employing a "double standard." Danon now hopes that Natan and Renana will succeed in significantly changing the UN's attitude towards Palestinian terrorism, or at least expose the organization's hypocrisy. "We'll show the world the truth of Palestinian terrorism," he said. "The UN must condemn Palestinian incitement and give a sharp and clear message that there is no difference between terrorism in France or Belgium and terrorism in Israel. The blood of Israeli citizens is not inferior to that of the rest of the world's citizens. The time has come to put an end to incitement authored by the Palestinian Authority."