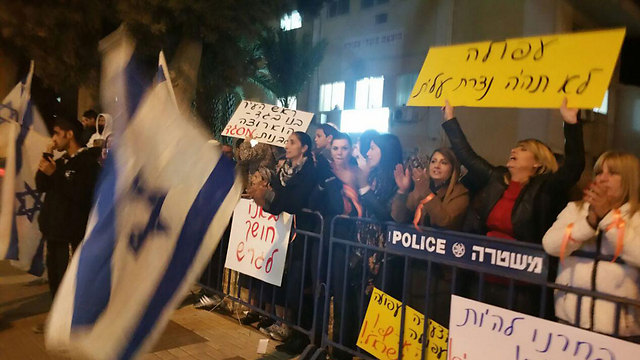 The Nazareth District Court rules that land tenders which only Arabs won is illegal. Bidders submitted the same proposal - NIS 255,555; Afula residents demonstrated against the mayor last December upon hearing of the auction results.

The Nazareth District Court ruled Sunday that land tenders in Afula, in which only Arabs won, was illegal due to price-fixing.

The winner's opponents claimed that the former illegaly coordinated their bids, as they submitted the same proposal: NIS 255,555. Forty six people out of 300 participants won a tender for 43 units. Following their win demonstrations erupted in the city in December against the Israel Lands Administration and against the Afula's mayor Yitzhak Meron.

The court's ruling does not include reference to the ethnicity of the winners. The judge noted that contrary to the position of the Land Authority, which claimed that the coordination of prices was due to familiarity and kinship among the bidders, about close to 20 bidders were using "a unifying identity" -  the engineer Muhammed Mokary - who told the group that 255,555 is his lucky number. All members of Mokary Group submitted their bids together through his firm, and the bank guarantee was delivered through the office.

The judge, Nazareth's District Court President Avraham Avraham, noted that this is undoubtedly a unifying factor that incorporated another smaller group, with which it coordinated prices. A third group, stated the judge, was associated indirectly, through a bank guarantee, to the Mokary Group.

The judge also held that the appeal committee of the Israel Lands Authority (on whose decision the lawsuit is based upon) erred when it did not deal with this claim as a unifying factor, he added, "Coordination between bidders causes a serious damage to the principle of equality. The bidders joined together to coordinate their proposals, dividing the market between them."

"After we found two flaws in the tender process", the judge ruled, "on the one hand, vague and misleading formulation of the conditions and on the other, improper coordination between the offerers, both of these struck a serious blow to the principle of equality in the tender. My conclusion is that there is no escape from the cancellation of the entire auction."

The judge was asked to consider the claim that the petition was filed with a  lack of integrity on the part of the petitioners as the suit was filed because they are Arabs who won a tender in a Jewish city.

"I do not examine the hearts and kidneys of the petitioners. My job is to craft a judgment that seeks to determine the claims that are spread out before me by the petitioners. And all that I can do, and all I have done, is to examine whether these are real arguments - and I found real ones - because of the damage in practice to the principle of equality of tenders, not because of the ethnicity of the Arab respondents."

About 200 residents of Afula demonstrated against the mayor last December after the auction results were announced carrying signs that read, "The mayor wants to build a mosque", "Arabs out", and "we have come to banish the darkness ."