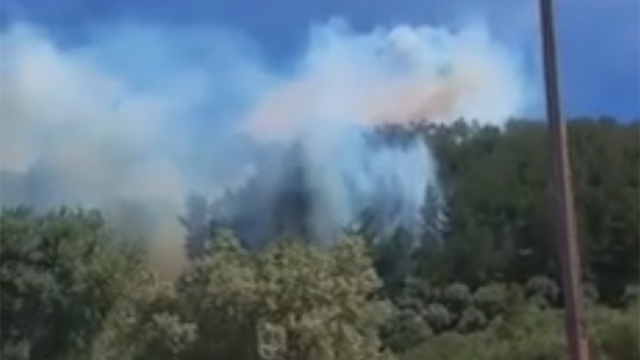 Large fire breaks out in Biriya Forest in upper Galilee

Firefighters gain control over the blaze and stop its advance towards the settlement of Amuka; forest has been evacuated of dozens of visitors and nearby roads closed.

A large fire broke out on Monday afternoon near the tomb of Rabbi Jonathan ben Uzziel in Biriya Forest in the upper Galilee. Firefighters were able to gain control over the fire and stop its advancement towards the nearby communal settlement of Amuka.

Many firefighting forces were dispatched to the forest to combat the blaze, including six airtankers and the Fire Department's northern district enacted the "Lashes of Fire" alert, used when there's concern a large-scale fire would quickly spread.

Fire at Biriya Forest (Photo: Yerusha Vlotker)
Dozens of visitors were evacuated from the area. The forest is among one of the more popular among KKL-JNF forests and is many Israelis visit it during Chol HaMoed.

Roads in the area, from Hatzor HaGlilit and Biriya to Amuka, were closed, and a command and control center was set up in the area including firefighting, Magen David Adom and police forces.

KKL forester Eli Hafuta estimated that dozens of dunams have burned down.

Meanwhile, a fire broke out at a grove on Highway 3 near Yesodot in the Shephelah region in central Israel. Firefighting forces were working to stop the spread of the fire towards the moshav. Train movement in the area was stopped and visitors were evacuated.

A fire also broke out in Elad Forest in the Samaria district of the West Bank. Firefighting and KKL teams were able to stop the spread of the fire, and evacuated visitors to the forest.