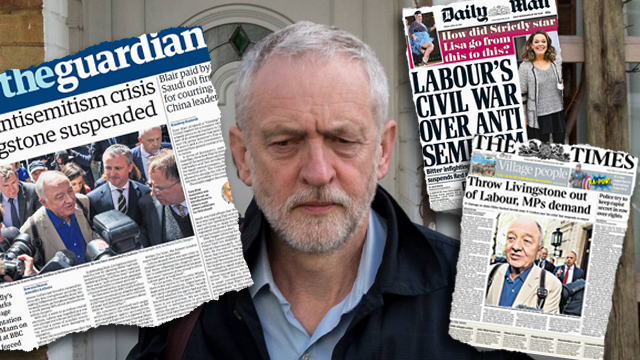 British daily The Telegraph reports that they were suspended due to racist and anti-Semitic statements; Labour chairman Jeremy Corbyn admits for the 1st time that there is a problem within the party.

Fifty members of the British Labour Party were secretly suspended over the last two months due to racist and anti-Semitic statements, the British daily The Telepgraph reported Monday.

Twenty out of the fifty were suspended only in the last two weeks. Labour chairman Jeremy Corbyn acknowledged for the first time that there is a problem within the party, although he insisted that “it is not a huge problem".

Corbyn told the Daily Mirror that “what there is is a very small number of people that have said things that they should not have done. We have therefore said they will be suspended and investigated.”

The center-left party is facing a crisis following a series of recent anti-Semitic statements made by several of its MPs. The former mayor of Blackburn, Salim Mulla, was suspended last Monday after accusing Israel of being responsibile for the Paris attacks. Last week Labour legislator Naz Shah was suspended for posting anti-Israel material before she was elected to Parliament. That prompted former London Mayor Ken Livingstone to defend her by saying that Nazi leader Adolf Hitler had been a Zionist early in his political career.

Party officials indicated to the Telegraph that the pressure on Corbyn from within the Labour Party is so great that there may be "a sort of revolution if the situation does not improve." Officials noted that Corbyn may be replaced later on by John McDonnell, the Shadow Chancellor of the Exchequer, most likely after the vote in parliament on whether or not the UK will remain in the EU.

One of Corbyn’s fiercest critics, Labour MP John Woodcock said, "The Labour party should make public the number of incidents it has had reported in recent years to the present, we mustn't allow any impression that we are seeking to minimize this very serious issue or sweep it under the carpet."